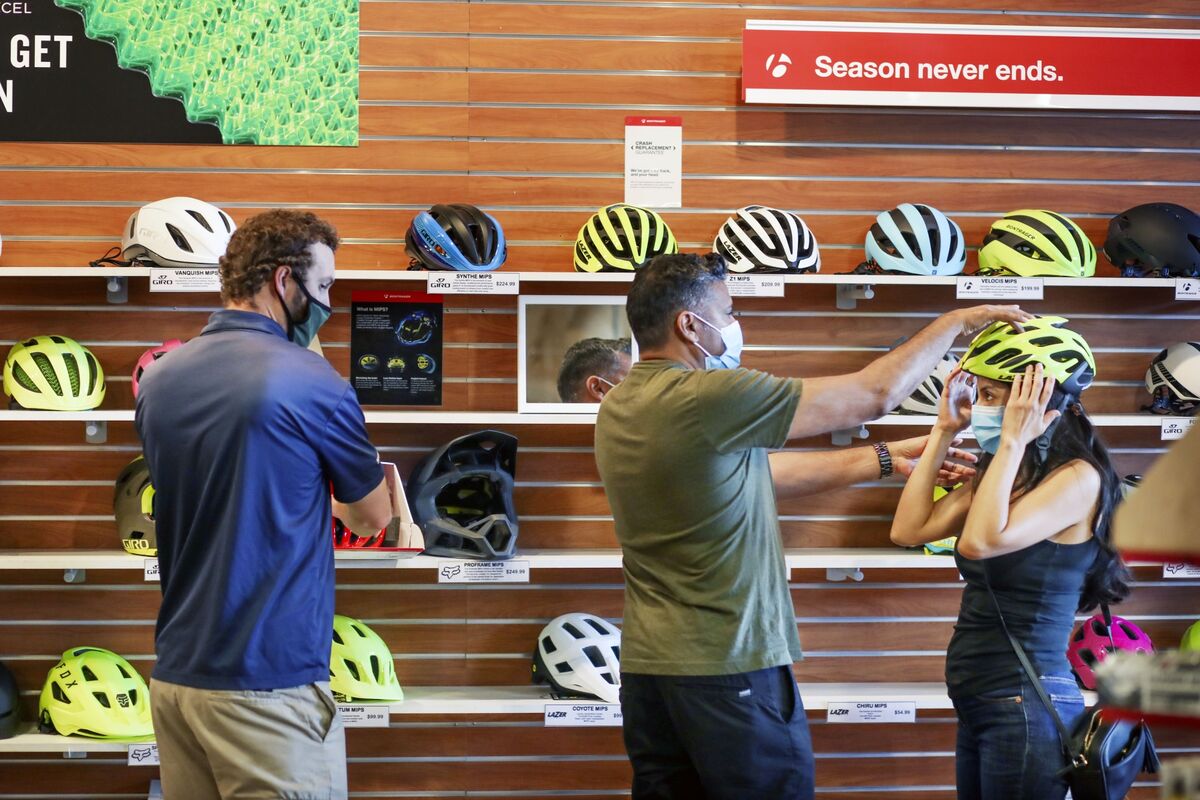 Customers crowding into U.S. bike shops are often walking out empty-handed — or if they’re lucky, with a bike whose price has repeatedly gone up since last year.

Looking for a Santa Cruz Hightower C R, a full-suspension carbon mountain bike? It’ll cost $4,749, up 10% from earlier this year. But with stocks depleted, buyers probably will be told to wait for the next model, due out this summer, at a higher price.

A hobby that’s enjoying a new wave of popularity illustrates the inflationary pressures rippling through the wider U.S. economy — and bringing political risks for President Joe Biden — amid supply bottlenecks and worldwide surges in demand.

Like their peers in many other industries, bike companies are passing along higher costs driven by rising raw-material prices, strained factories and overloaded delivery chains. They’ve been able to do that without damping customer demand. And executives foresee more price increases, with supply expected to remain tight and demand elevated through at least next year.

Sales across the U.S. bicycle market rose sharply in 2020

“The only way things would go down is if there’s a glut of supply,” said Joe Graney, chief executive officer of California-based Santa Cruz Bicycles. “That doesn’t seem like it’s going to be an issue.”

Prices for all kinds of products, from lumber to diapers, have been climbing this year. The headline measure of consumer prices rose 4.2% in the 12 months through April, the most since 2008. The numbers for May are due to be published on Thursday.

The Biden administration and the Fed say inflation will likely ease later this year. In the bike industry, though, many expect increases to last longer than that. If that turns out to be the case more broadly for prices across the economy, it could trigger voter discontent as Biden’s Democrats prepare to defend their narrow control of the House and Senate in next year’s midterm elections. Republicans blame Biden’s stimulus spending for stirring up inflation.

Americans went on a bike-buying binge at the start of the Covid-19 lockdown, to get exercise, avoid public transportation or entertain kids stuck at home. Now, savings during lockdown — when many people canceled vacations and avoided eating out — as well as Covid-19 relief checks are propping up demand, according to retailers and bike companies.

They cite other factors too. Some of today’s customers want to ride with friends who purchased bikes during the pandemic. And cities are becoming more bike-friendly: Many localities that closed off streets and added bike lanes during the pandemic have kept those changes in place.

A bicyclist rides through Domino Park in the Brooklyn borough of New York City, in May  2020.

The resulting demand is showing up everywhere from big-box retailers like Walmart Inc.  — where many lower-range models are sold — to specialized stores.

Bicycle sales are up 77% in the year through March to $6.7 billion, according to research firm NPD Group, while the average amount paid for a bike rose 27% — partly due to price hikes and partly because depleted stocks pushed customers to choose more expensive models.

“We’ve got another surge coming in,” said David Conte, chief operating officer of Conte’s Bike Shop, which has 15 stores from Washington, D.C., to Florida. “We’re almost getting a double whammy here. We can’t meet demand.”

Conte said he’s been receiving less than half of the bikes he ordered. Even so, he’s in a better position than many smaller retailers whose racks are empty.

The supply problems faced by bike companies have pre-pandemic roots.

Toward the end of 2019, major brands held off placing orders from China, where most bikes and parts are made, to await an exemption on 25% tariffs imposed by the Trump administration, said Jay Townley, a former bike company executive who now works at consultancy Human Powered Solutions.

The exemption came through and bike companies placed their orders in early 2020 when Chinese factories were closed for Lunar New Year, he said. But then Covid-19 hit, and the factories remained shuttered.

Now they’re running full tilt and reluctant to expand capacity, likely because of concern over how long increased demand will last, Townley said.

Meanwhile the tariff exemption for bikes has expired, and there’s no indication it’ll be renewed. And the price for shipping a container from China to the U.S. West Coast has been hovering near record highs for several months. Many of these added expenses are set to remain, with high shipping prices getting sealed into contracts for the next year.

During the Covid-19 restrictions, U.S. bicycle imports hit the highest levels in more than five years.

It’s also taking longer to fill orders, with some customers being told they’ll have to wait more than a year.

That’s fueling frustration. Rahvi O’Hara, who lives in central Florida, said she’s trying to find a mountain bike to replace the one she bought for her 14-year-old son Ethan just before the pandemic. The model she paid $300 for back then now sells at $500 — but she can’t find one in stock anywhere, even after calling five shops. The only bikes available cost around $4,000.

“They can’t confirm when the shipments will come in,” O’Hara said. “They say as soon as the bikes come in, they sell out.”

Things aren’t much different at online retailers. Canyon Bicycles GmbH, a German company that started selling in the U.S. in 2017, indicates on its website that a number of models are unavailable.

The demand has spilled over into used bike sales, with some sellers commanding prices that are higher than they originally paid. Stocks of replacement parts have been run down too, as many sought to repair aging bikes during lockdowns. Key parts like tires and chains are becoming hard to find, and where they’re available their prices keep rising.

It’s been a profitable time for producers. Net operating income at Giant Manufacturing Co. was up 55% in the first quarter from a year earlier. Shimano Inc. said operating income in its bicycle components division jumped 169%.

The big question in the industry is how long the heightened demand will last.

Townley, the consultant, expects spending patterns to shift toward services and away from goods like bikes as the pandemic fades —  which could lead to some discounting toward the end of the year.

But industry executives expect demand to hold up for at least the next couple of years.

Clark said he placed orders for bikes through calendar year 2023, anticipating sales will continue to grow, and he expects many of those who took up the sport in the pandemic will stick with it.

“Some people got hooked on riding the bicycle,” the Canyon executive said.

— With assistance by Alexandre Tanzi

Before it’s here, it’s on the Bloomberg Terminal.

As signs that the second wave of COVID-19 is beginning to wane and travel restrictions loosen, foreign investors are looking to return to the U.S., … END_OF_DOCUMENT_TOKEN_TO_BE_REPLACED

Wall Street stocks continued to rise while government bonds softened as investors addressed the effects of US employment reports, which were much … END_OF_DOCUMENT_TOKEN_TO_BE_REPLACED