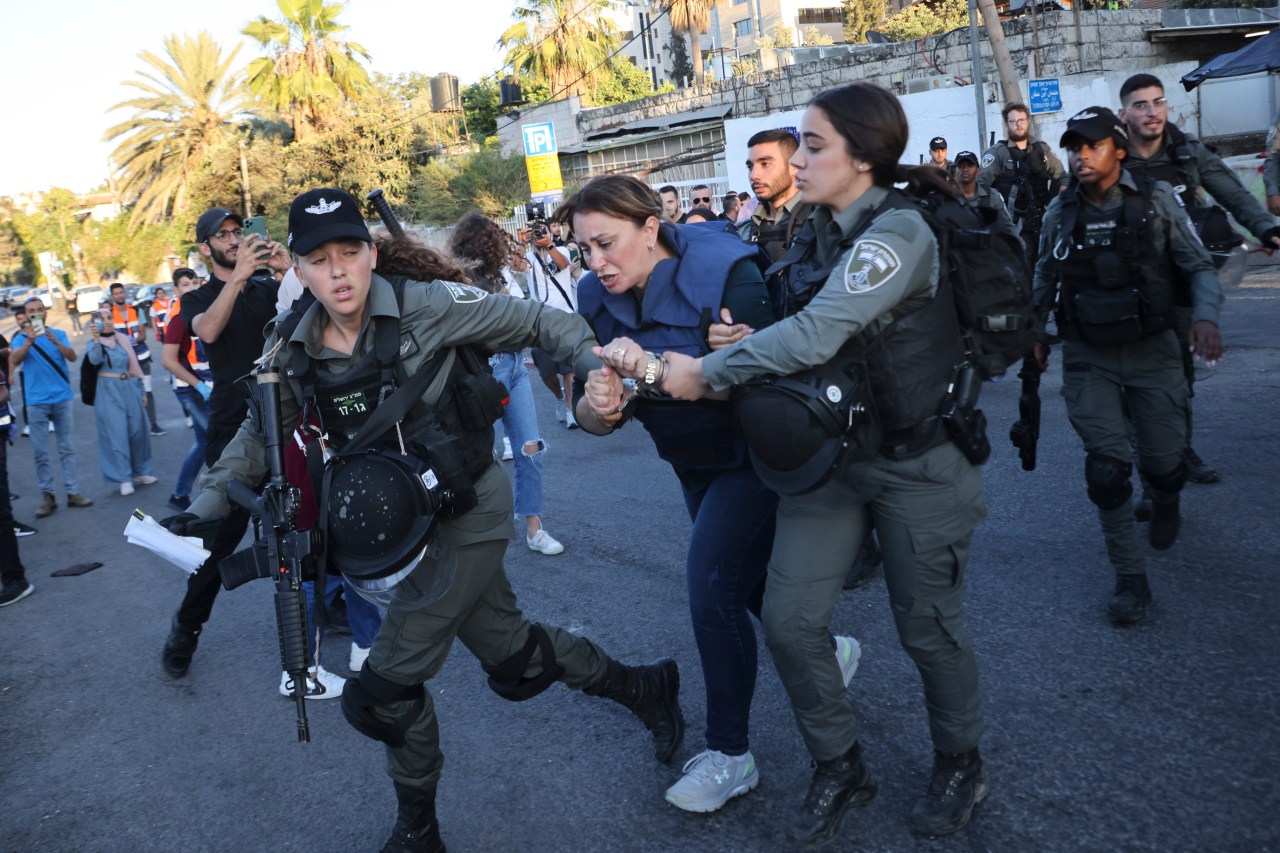 JERUSALEM (AP) — Israeli border police forcefully detained a veteran correspondent for the Al Jazeera satellite channel while she was reporting from an embattled Jerusalem neighborhood where dozens of Palestinian families are slated for eviction by Jewish settlers.

Givara Budeiri was released late Saturday, several hours after border police detained her in the Sheikh Jarrah neighborhood, where she had been wearing body armor marked “press.” Al Jazeera said police also destroyed equipment belonging to a cameraman for the channel.

Budeiri had been reporting regularly from Sheikh Jarrah, Omary said.

On Saturday, she was covering a Palestinian sit-in at the site. Omary said Israeli border police asked for her ID and that she offered to call her driver to get it from her car. Omary said the forces refused to let her retrieve it and instead started shouting and pushing her. At one point, the officers handcuffed her and pushed her into a border police vehicle.

In video footage posted online, Budeiri can be seen handcuffed and surrounded by border police. Clutching her notebook, she is heard shouting, “Don’t touch, enough, enough.”

Israeli police said Budeiri was detained after she was asked for identification, refused and pushed a police officer.

Oren Ziv, a cameraman on the scene, said the protest was over at the time of the incident, which happened at 7 p.m. and took only a few seconds. The officers did not wait for Budeiri to get her identification. They took her to a waiting border police vehicle with darkened windows, where she was put in the back seat with female officers.

Al Jazeera’s acting director general, Mostefa Souag, condemned the police actions. “The systematic targeting of our journalists is in total violation of all international conventions,” he said.

“They are attacking the journalists in east Jerusalem because they don’t want them to continue covering what’s happening inside Sheikh Jarrah,” Omary said.

The tension in Sheikh Jarrah has fueled weeks of unrest and helped spark an Israel-Hamas war after the Islamic militant group fired several rockets toward Jerusalem on May 10, positioning itself as a defender of Palestinian rights in the holy city.

The war, in which 254 people were killed in Gaza and 12 in Israel, ended May 21. In all, Gaza militants fired more than 4,000 rockets toward Israel, while Israel bombed hundreds of Gaza targets it said were linked to militants.

The most imminent Jerusalem evictions are on hold, following the intervention by Israel’s attorney general, but the settlers’ campaign continues.

Rights groups fear the evictions could still be carried out in the coming months as international attention wanes, potentially igniting another round of bloodshed. The Israeli watchdog Ir Amim, which closely follows the various court cases, estimates that at least 150 households in two neighborhoods are threatened with eviction.

Souag accused Israel of attempting to silence journalists in a systematic fashion. He noted that Budeiri’s detention came after Israel’s May 15 war-time destruction of a Gaza high-rise that housed the local office of Al Jazeera. The tower also housed the Gaza office of The Associated Press.

Israel has alleged that Hamas military intelligence was operating from the building. The AP has said it has no indication of a purported Hamas presence in the building. It has called for an independent investigation.

As signs that the second wave of COVID-19 is beginning to wane and travel restrictions loosen, foreign investors are looking to return to the U.S., … END_OF_DOCUMENT_TOKEN_TO_BE_REPLACED

Wall Street stocks continued to rise while government bonds softened as investors addressed the effects of US employment reports, which were much … END_OF_DOCUMENT_TOKEN_TO_BE_REPLACED