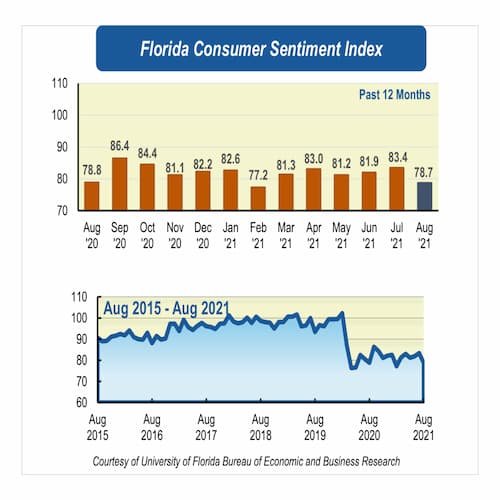 August consumer sentiment drops around the country amid worries about U.S. economy

“The decline in consumer confidence comes as no surprise as it remains unclear whether the recent spike in inflation due to supply chain bottlenecks, pent-up demand, and labor shortages is temporary. Additionally, the latest surge in coronavirus cases and hospitalizations brought on by the Delta variant has spooked consumers resulting in event cancellations, hindering consumer spending, and casting a shadow on the economic recovery in the short-run,” said Hector H. Sandoval, director of the Economic Analysis Program at UF’s Bureau of Economic and Business Research.

All five components that make up the index declined.

Floridians’ opinions about their personal finances now compared with a year ago decreased 3.9 points from 75.8 to 71.9. Similarly, opinions as to whether this is a good time to buy a big-ticket item, such as refrigerators, cars, or furniture dropped 1 point from 74.8 to 73.8. Both downward readings were shared by all Floridians with the exception of men in the former component and people with an annual income over $50,000 in the latter, whose readings were more optimistic.

“While the decline in confidence was fueled by growing pessimism in all five components, the main factors behind the downturn were Floridians’ expectations about U.S. economic conditions in the short- and long-run. These expectations signal a potential decline in discretionary spending that could hinder the economic recovery,” Sandoval said.

Conducted July 1 through August 26, the UF study reflects the responses of 210 individuals who were reached on cellphones and 286 individuals reached through an online panel, a total of 496 individuals, representing a demographic cross section of Florida. The index used by UF researchers is benchmarked to 1966, which means a value of 100 represents the same level of confidence for that year. The lowest index possible is a 2, the highest is 150.

Details of this month’s survey can be found at http://www.bebr.ufl.edu/csi-data

The University of Florida’s mission is to prepare our students to lead and influence the next generation and beyond for economic, cultural and societal benefit. Recognized as among the top 10 public universities by U.S. News & World Report, UF is one of the nation’s largest public universities, and is the only member of the Association of American Universities in Florida. Teaching, research and scholarship, and service span all of the UF’s academic disciplines and represent its commitment to be a premier university that the state, nation and world look to for leadership. www.ufl.edu.

As signs that the second wave of COVID-19 is beginning to wane and travel restrictions loosen, foreign investors are looking to return to the U.S., … END_OF_DOCUMENT_TOKEN_TO_BE_REPLACED

Wall Street stocks continued to rise while government bonds softened as investors addressed the effects of US employment reports, which were much … END_OF_DOCUMENT_TOKEN_TO_BE_REPLACED