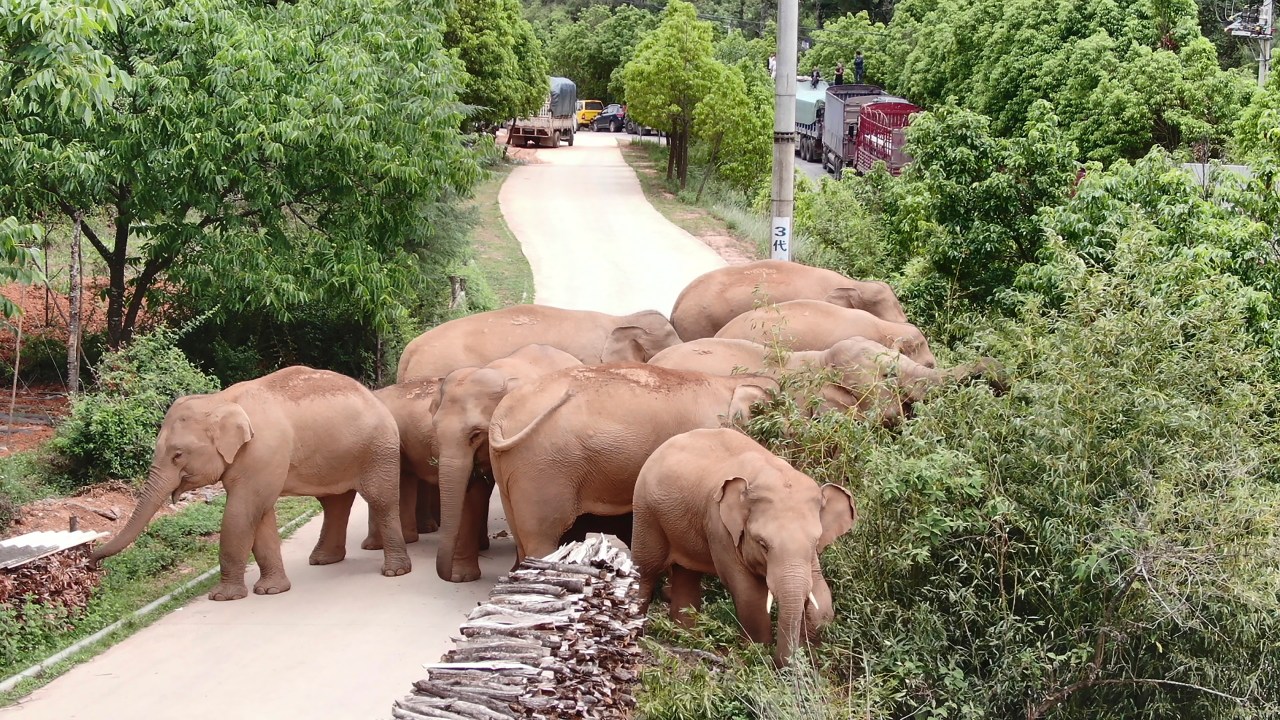 Major global media are chronicling the herd’s more than yearlong, 500 kilometer (300 mile) trek from their home in a wildlife reserve in mountainous southwest Yunnan province to the outskirts of the provincial capital of Kunming.

Twitter and YouTube are full of clips of their various antics, particularly those of two calves, who slipped into an irrigation ditch and had to be helped out by older members of the group.

“We should be more like the elephant and be more family oriented, take family vacations and help and care for and protect each other,” read one comment on Youtube signed MrDeterministicchaos.

The elephants have been trending for days on China’s Weibo microblogging service with photos of the group sleeping attracting 25,000 posts and 200 million views Monday night.

The 15-strong herd has been caught at night trotting down urban streets by security cameras, filmed constantly from the air by more than a dozen drones and followed by those seeking to minimize damage and keep both pachyderms and people out of harm’s way.

They’ve raided farms for food and water, visited a car dealership and even showed up at a retirement home, where they poked their trunks into some of the rooms, prompting one elderly man to hide under his bed.

While no animals or people have been hurt, reports put damage to crops at more than $1 million.

Sixteen animals were originally in the group, but the government says two returned home and a baby was born during the walk. The herd is now composed of six female and three male adults, three juveniles and three calves, according to official reports.

What exactly motivated them to make the epic journey remains a mystery, although they appear to be especially attracted to corn, tropical fruit and other crops that are tasty, plentiful and easy to obtain in the lush tropical region that is home to about 300 of the animals. Others have speculated their leader may be simply lost.

Elephants are given the top level of protection in China, allowing their numbers to steadily increase even as their natural habitat shrinks, and requiring farmers and others exercise maximum restraint when encountering them. Government orders have told people to stay inside and not to gawk at them or use firecrackers or otherwise attempt to scare them away.

So far, more passive means are being used to keep them out of urban areas, including the parking of trucks and construction equipment to block roads and the use of food drops to lure them away.

As of Tuesday, the herd remained on the outskirts of Kunming, a city of 7 million, with one of the males having moved away on his own, creating even more excitement — and worry — for those attempting to keep tabs on them.

A news release Monday from a provincial command center set up to monitor the group said the elephants appeared to be resting, while more than 410 emergency response personnel and police personnel, scores of vehicles and 14 drones were deployed to monitor them. Area residents were evacuated, temporary traffic control measures implemented, and 2 tons of elephant food put in place.

Another objective was to “maintain silence to create conditions for guiding the elephant group to migrate west and south,” the command center said.

As signs that the second wave of COVID-19 is beginning to wane and travel restrictions loosen, foreign investors are looking to return to the U.S., … END_OF_DOCUMENT_TOKEN_TO_BE_REPLACED

Wall Street stocks continued to rise while government bonds softened as investors addressed the effects of US employment reports, which were much … END_OF_DOCUMENT_TOKEN_TO_BE_REPLACED