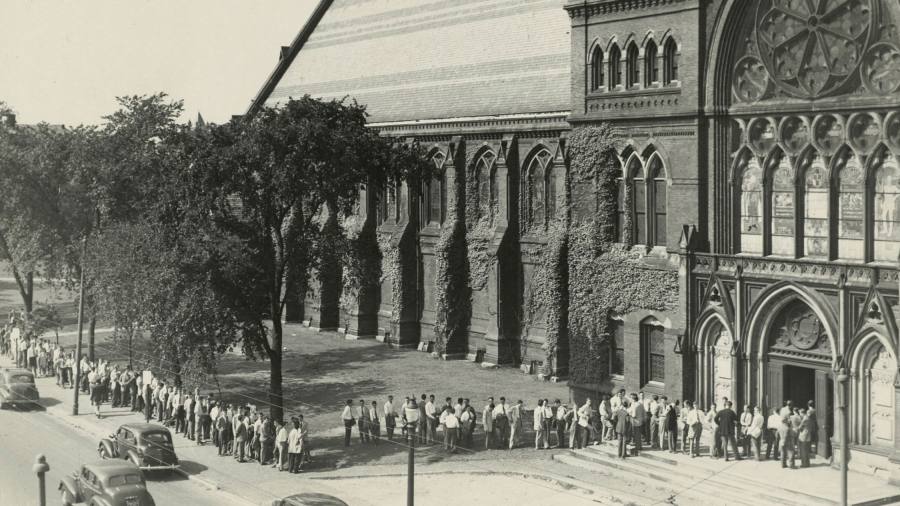 In February 1945, while the second world war was still being waged, Harvard Business School faculty gathered and took an extraordinary decision. The academics voted unanimously for a “clean sweep resolution”, scrapping prewar courses and opting to start again with a blank sheet. It was a clear sign of the business school’s determination to “win the peace”.

HBS had devoted all its resources to helping win the war. After a period of trying to pursue business as usual, in late 1942, it shut down its MBA and transformed its campus and courses for the training of military leaders and civilians involved in the war effort. Three years later, Donald David, then HBS dean, said: “Surely the school’s wartime record . . . would be quickly forgotten if our efforts on behalf of the men who have won this were any less determined than our efforts in the officer-training program.”

There are clear dangers in adopting warlike rhetoric to lead through the pandemic, let alone trying to appoint “wartime CEOs” to do battle with a virus. Yet there are telling parallels between the two crises. In particular, as economies edge out of lockdown, the challenges of winning the peace and tackling the slower-burning threats of social exclusion and climate change again loom large. Peter Tufano, outgoing dean of Oxford’s Saïd Business School, makes this point in an essay for Business History Review about how US business schools responded in wartime.

The actions of the five schools Tufano studies varied widely. Wharton “all but adjourned for the duration of the conflict”, according to its official history. Berkeley used the war as cover for institutional change. Its dean converted its college of commerce into a fully fledged school (later Haas School of Business) and started awarding its first MBAs.

Other US schools experimented and innovated. Marking the restart of a peacetime curriculum at HBS in 1946, The New York Times wrote that its courses would make more use of visual aids, as used by military trainers: “Motion pictures, slides, posters and other types of visual materials will be utilised beyond anything attempted in the past.”

Similarly, today’s lecturers have had to work out how to teach differently for an online class, or for a mixture of students online and those present in person. Most of the US schools’ wartime changes were, however, mere “reactive adaptation”, according to Tufano, whereas Harvard undertook a “fundamental alteration”. The school rethought not only how it would teach after the war, but also what it planned to teach and research, and, more importantly, why.

Tufano was an HBS faculty member for 22 years. He does not conceal his admiration for the radical change his alma mater made, although he concedes that some of the progressive initiatives started in wartime — bringing female and black students to the campus through a trade union fellowship, for instance — ebbed away after the conflict.

He is not the first to seek inspiration from the way in which societies and institutions responded to the pressure of war. Harvard professor Rebecca Henderson writes in her recent book Reimagining Capitalism about how such collaboration could offer a key to fighting climate change. One of her examples is the regeneration of West Germany after the second world war, when unions and industry worked together to revive the apprenticeship system.

No matter how thorough a research study may be, it will be of little use if there is no interest in the subject on the part of the public or industry.”

In wartime, US business schools were able to innovate thanks to what one junior Harvard professor called “the temporary repression of traditional academic perfectionism”. Faced with a national shortage of trained managers, Chicago introduced the first executive MBAs. Other schools stepped up collaboration with each other and broke down internal barriers between departments, later building on the success of joint teaching programmes during the war.

Useless, theoretical management research was ditched in favour of work that was timely and applicable. As one evaluation of an HBS programme pointed out, in words as relevant now as then: “No matter how thorough a research study may be, it will be of little use if there is no interest in the subject on the part of the public or industry.”

The second world war showed the need for leaders to understand logistics and operations, Tufano writes. Echoing Henderson, he points out that the latest crop of global crises have instead exposed the interconnectedness of complicated systemic problems and the need to train leaders who “appreciate the complex systems that drive pandemics, racial divides and climate tipping points”.

A strong purpose can trump hidebound traditions and norms. So can an external threat. A combination of the two should be a powerful force for change in business education, according to Tufano. Yet, despite the need for “systems leaders” who can handle wartime and peacetime challenges, he warns, “most business schools are adapting, as opposed to using this as a moment of transformation”.

As signs that the second wave of COVID-19 is beginning to wane and travel restrictions loosen, foreign investors are looking to return to the U.S., … END_OF_DOCUMENT_TOKEN_TO_BE_REPLACED

Wall Street stocks continued to rise while government bonds softened as investors addressed the effects of US employment reports, which were much … END_OF_DOCUMENT_TOKEN_TO_BE_REPLACED