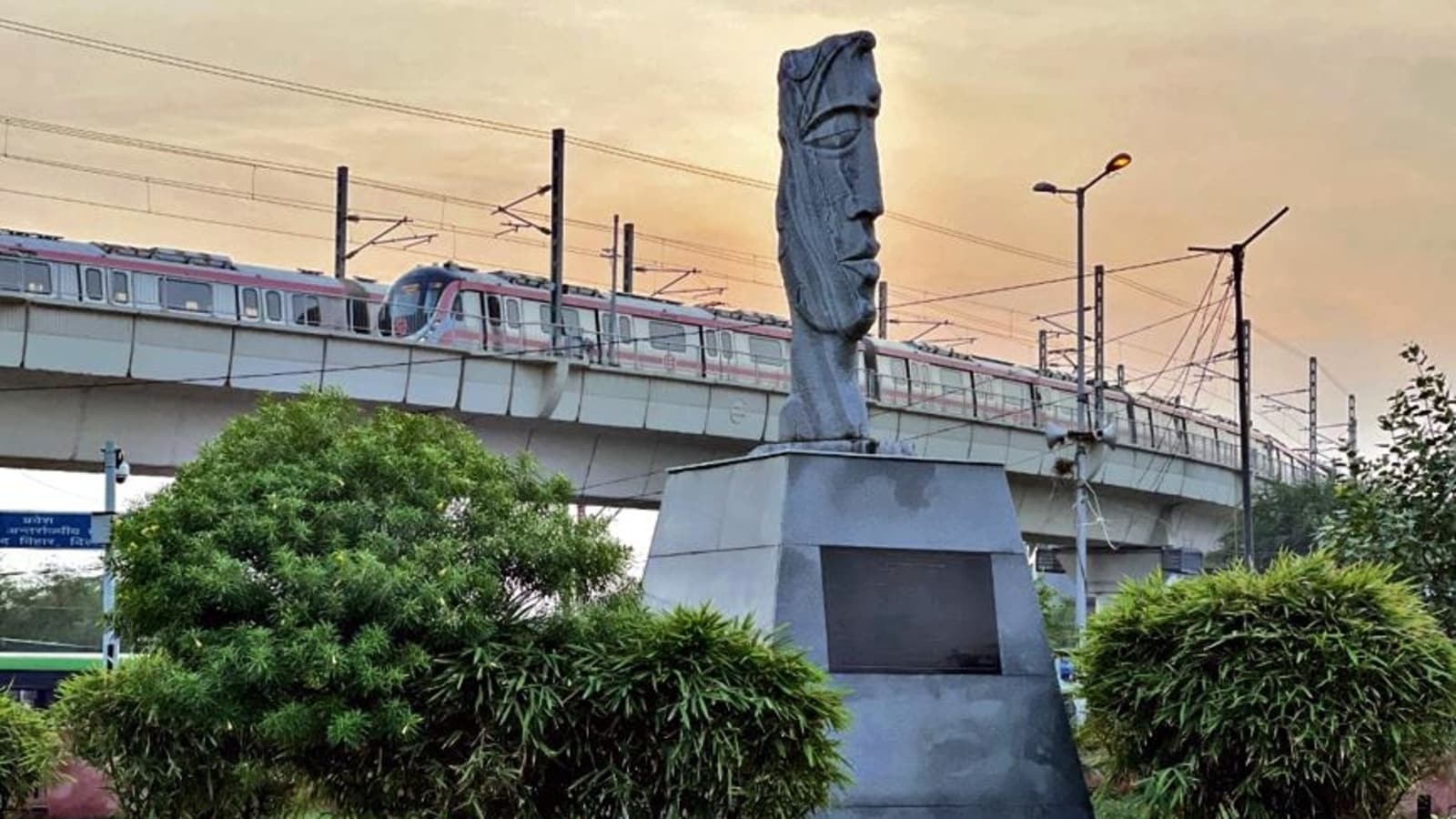 To be emotionally resilient to misfortune. To accept the moment as it presents itself.

If you can be this, then you’re a stoic person.

You may dig deeper by reading the complete Wikipedia entry on stoicism. Or you may come to Anand Vihar, at the Delhi-UP border, and gaze upon this face that looks the very essence of stoicism.

The sculpture is installed in a small park. The eyes are half-open, the lips may be smiling a little, as if hinting at the person’s bemusement at the ways of the world—probably implying that the only way to get through is to stay detached from passing joys and griefs.

This evening the world around the park—it is tucked in the middle of the Ghaziabad-bound highway—is milling with traffic and pedestrians. The bus terminus across the road is continually flushing out roadways buses headed to UP towns like Bareilly and Etawah. But the park is empty, except for a man asleep at the foot of the sculpture. Far behind, the sun is setting and the sky is bleached in various shades of red, pink and orange. The elevated metro track forms the sculpture’s imposing backdrop. Soon enough, two trains appear from opposite sides and pass each other noiselessly. The scene seems to symbolise the face’s two clashing emotions—pleasure and pain. They cancel each other, leaving the figure indifferent to both.

A plaque underneath reveals the moortikar, the sculptor, to be Dr Lal Ratnakar, from Jaunpur/Ghaziabad. The artwork—titled Niharika—was unveiled in 2014 on the occasion of an art festival in Ghaziabad.

To be sure, Delhi region is full of statutes and sculptures. Most statues lie in neglect, even though some are more interesting (like the Tolstoy’s statue, with his flowing beard in Janpath). Many sculptures in the city’s public spaces are so abstract that they are difficult to understand (like the one at Mandi House). But this face is easy to read. As the daylight fades, the face looks more like its own shadow, losing the solidity of its stoniness.

Meanwhile, the sleeping man is still asleep, the traffic is becoming more chaotic, and the metro trains are appearing in swift intervals. The stoic face is accepting the world as what it is.

As signs that the second wave of COVID-19 is beginning to wane and travel restrictions loosen, foreign investors are looking to return to the U.S., … END_OF_DOCUMENT_TOKEN_TO_BE_REPLACED

Wall Street stocks continued to rise while government bonds softened as investors addressed the effects of US employment reports, which were much … END_OF_DOCUMENT_TOKEN_TO_BE_REPLACED