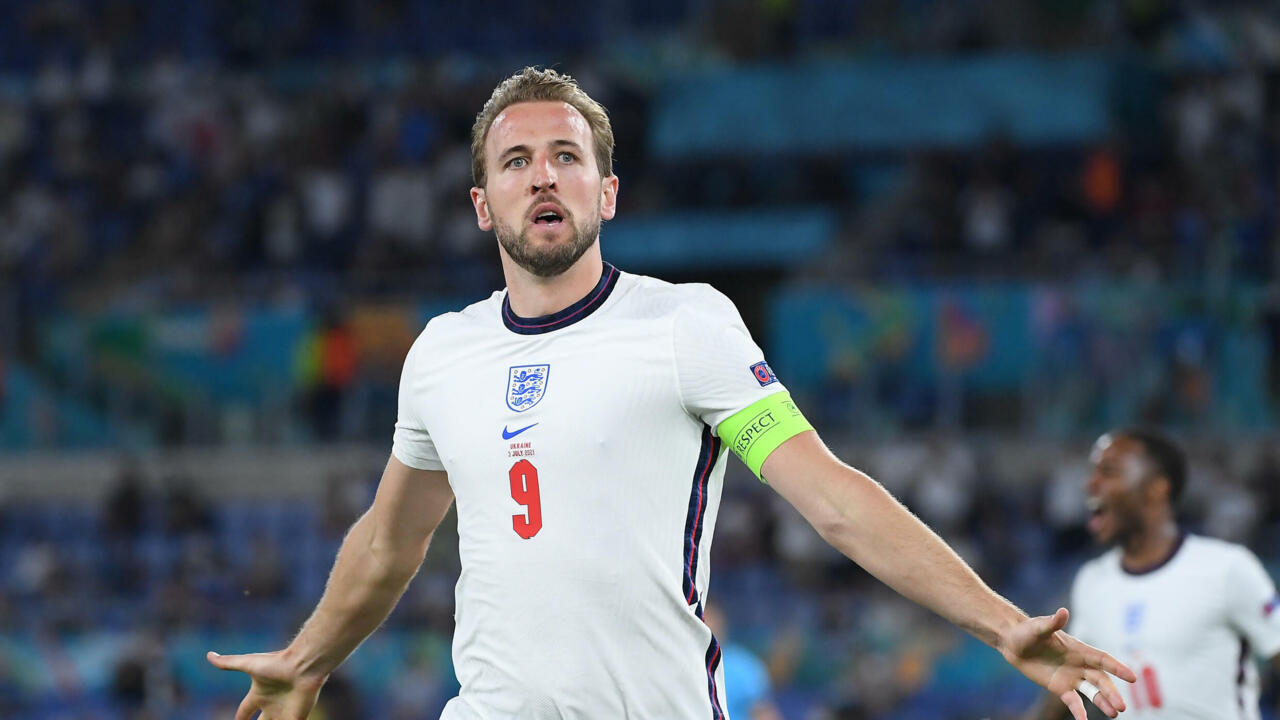 Harry Kane scored twice as a buoyant England cruised through to the semi-finals of Euro 2020 with a one-sided 4-0 win over Ukraine in Rome on Saturday.

Kane ended a worrying international scoring drought by netting in the 2-0 last-16 defeat of Germany in midweek and he put England ahead inside four minutes on a sweaty evening in the Italian capital.

Gareth Southgate’s side then put this quarter-final tie out of sight with two more goals early in the second half, one from Harry Maguire before Kane netted again.

Substitute Jordan Henderson got the fourth, and as Denmark lie in wait in the Wembley semi-final on Tuesday England will be confident of going on to reach a first ever European Championship final and even now claiming a first major international title since 1966.

Sum up this knockout tie in one word 👇#EURO2020

The draw here was kind for them, with Ukraine surely as weak an opponent as they could hope to face in a quarter-final, a stage at which they have lost to the likes of Italy and Portugal in recent European Championships.

However the statistics are impressive, with England having come through five games at this tournament all without conceding a goal.

Some of their play in wide areas was outstanding, with Raheem Sterling and Jadon Sancho—making his first start at the Euro—too hot for Ukraine to handle.

Kane, their captain, had gone close to eight hours without finding the net for his country but his opener here was his second in just eight minutes following the late strike that secured victory over Germany.

Regardless of the opposition, their display at the Stadio Olimpico was a step-up in class in the final third to previous games at the Euro and they will be favourites at home against a Danish side who played their own quarter-final against the Czech Republic on Saturday in distant Baku.

This will be the only match England play away from home in the competition and it marked quite a difference to their defeat of the Germans, which was watched by more than 40,000 supporters at Wembley, where coronavirus restrictions were eased.

With Italy currently imposing a five-day quarantine on all arrivals from the United Kingdom, the number of England fans in Rome was limited to those already based in the European Union although they still made themselves heard in the crowd of under 12,000.

They had plenty to celebrate, unlike their Ukrainian counterparts, as Andriy Shevchenko’s team came up short in their bid to take the country to a first ever major tournament semi-final.

They scraped out of their group and then edged 10-man Sweden in extra time in the last 16, and their chances of shocking England looked dead and buried when they fell behind early on.

Sterling, who terrorised the Ukraine defence down the left, played in Kane who poked the ball past Georgiy Bushchan.

🏴󠁧󠁢󠁥󠁮󠁧󠁿 1st time England have scored 4 goals in a knockout stage match of a major tournament since the final of the World Cup in 1966…#EURO2020 pic.twitter.com/GvKzvqG5pC

Ukraine’s giant striker Roman Yaremchuk forced a save from Jordan Pickford and a Declan Rice piledriver was kept out by Bushchan, with England looking comfortable.

However Ukraine were a different proposition after injured defender Serhiy Kryvtsov was replaced by Dynamo Kiev winger Viktor Tsygankov in the 36th minute.

They finished the first half strongly and more pessimistic England fans may have spent the interval reliving their exit from Euro 2016, when they lost to Iceland in the last 16 despite also having opened the scoring in the fourth minute.

They need not have worried.

England scored again less than a minute after the restart when a foul on Kane allowed Luke Shaw to deliver a free-kick from the left for Maguire to head in.

Four minutes after that Sterling supplied the overlapping Shaw and he crossed for a rejuvenated Kane to head home.

The Tottenham star nearly had his hat-trick, a stinging volley producing a fine save from Bushchan.

From Mason Mount’s resulting corner came the fourth goal, another header, this time from Henderson, the first of five substitutes sent on by Southgate who would have been thinking about the semi-final long before this quarter-final was officially over.

As signs that the second wave of COVID-19 is beginning to wane and travel restrictions loosen, foreign investors are looking to return to the U.S., … END_OF_DOCUMENT_TOKEN_TO_BE_REPLACED

Wall Street stocks continued to rise while government bonds softened as investors addressed the effects of US employment reports, which were much … END_OF_DOCUMENT_TOKEN_TO_BE_REPLACED