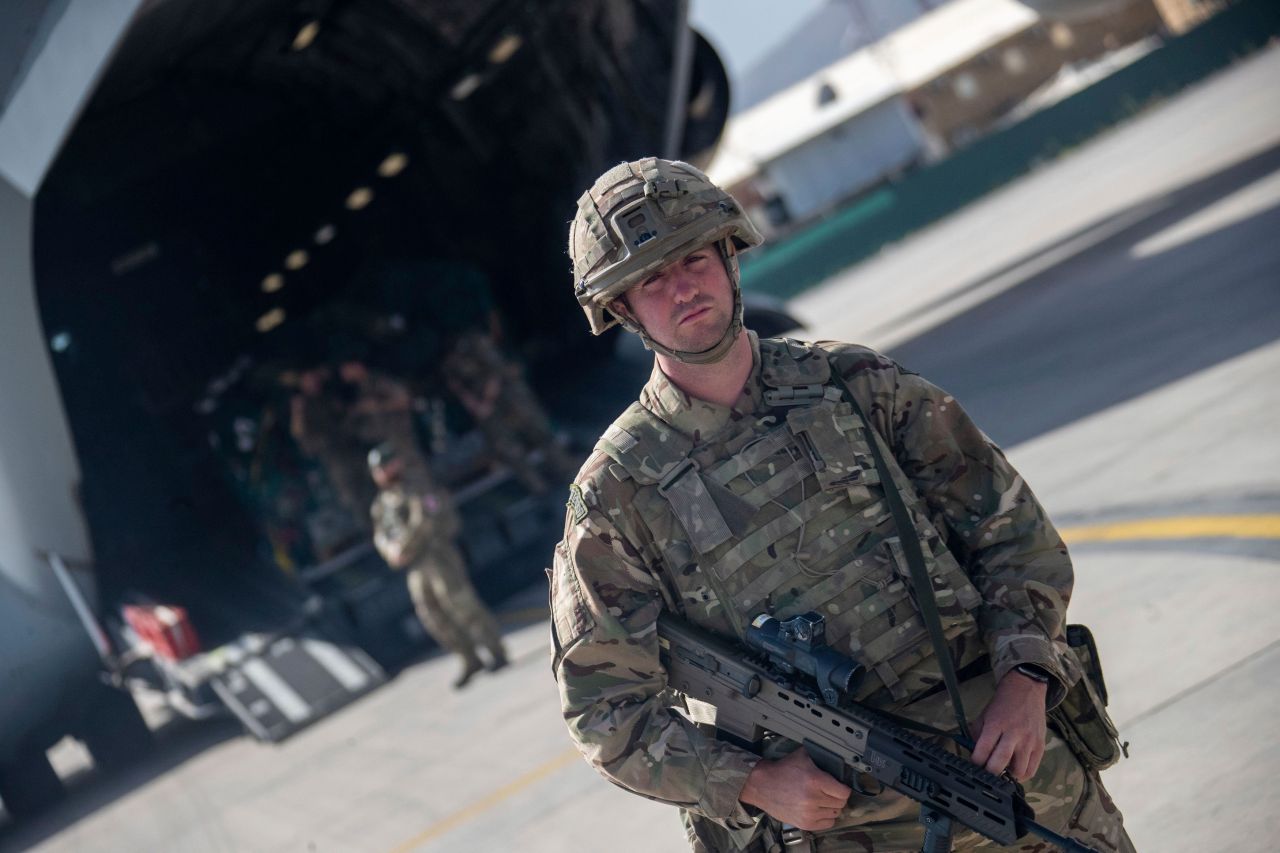 Photo issued on Saturday Aug. 28, 2021 by Britain’s Ministry of Defence (MoD) showing UK military personnel boarding a A400M aircraft departing Kabul, Afghanistan. Britain ended its evacuation flights Saturday, though Prime Minister Boris Johnson promised to “shift heaven and earth” to get more of those at risk from the Taliban to Britain by other means. Britain’s ambassador to Afghanistan, Laurie Bristow, said in a video from Kabul airport and posted on Twitter that it was “time to close this phase of the operation now.” (Jonathan Gifford/MoD via AP)

KABUL, Afghanistan (AP) — A Taliban fighter shot dead an Afghan folk singer in a restive mountain province under unclear circumstances, his family said Sunday. The killing reignited concerns among activists that the insurgents would return to their oppressive rule in the country after their military blitz toppled the government.

The slaying of Fawad Andarabi comes as the United States winds down a historic airlift that saw tens of thousands evacuated from Kabul’s international airport, the scene of much of the chaos that engulfed the Afghan capital since the Taliban took over two weeks ago. After an Islamic State affiliate’s suicide attack that killed over 180 people, the Taliban increased its security around the airfield as Britain ended its evacuation flights Saturday.

U.S. military cargo planes continued their runs into the airport Sunday, ahead of a Tuesday deadline earlier set by President Joe Biden to withdraw all troops from America’s longest war.

The shooting Friday of the folk singer came in the Andarabi Valley for which he was named, an area of Baghlan province some 100 kilometers (60 miles) north of Kabul. The valley had seen upheaval since the Taliban takeover, with some districts in the area coming under the control of militia fighters opposed to the Taliban rule. The Taliban say they have since retaken those areas, though neighboring Panjshir in the Hindu Kush mountains remains the only one of Afghanistan’s 34 provinces not under its control.

The Taliban previously came out to Andarabi’s home and searched it, even drinking tea with the musician, his son Jawad Andarabi told The Associated Press. But something changed Friday.

“He was innocent, a singer who only was entertaining people,” his son said. “They shot him in the head on the farm.”

His son said he wanted justice and that a local Taliban council promised to punish his father’s killer.

Taliban spokesman Zabihullah Mujahid told the AP that the insurgents would investigate the incident, but had no other details on the killing.

Andarabi played the ghichak, a bowed lute, and sang traditional songs about his birthplace, his people and Afghanistan as a whole. A video onlineshowed him at one performance, sitting on a rug with the mountains of home surrounding him as he sang.

“There is no country in the world like my homeland, a proud nation,” he sang. “Our beautiful valley, our great-grandparents’ homeland.”

Karima Bennoune, the United Nations special rapporteur on cultural rights, wrote on Twitter that she had “grave concern” over Andarabi’s killing.

“We call on governments to demand the Taliban respect the #humanrights of #artists,” she wrote.

“There is mounting evidence that the Taliban of 2021 is the same as the intolerant, violent, repressive Taliban of 2001,” she wrote on Twitter. “20 years later. Nothing has changed on that front.”

Meanwhile on Sunday, private banks across Afghanistan resumed their operations. However, they limited withdrawals to no more than the equivalent of $200 a day.

While some complained of still being unable to access their money, government employees say they haven’t been paid over the last four months. The Afghani traded around 90.5 to $1, continuing its depreciation as billions of dollars in the country’s reserves remain frozen overseas.

As signs that the second wave of COVID-19 is beginning to wane and travel restrictions loosen, foreign investors are looking to return to the U.S., … END_OF_DOCUMENT_TOKEN_TO_BE_REPLACED

Wall Street stocks continued to rise while government bonds softened as investors addressed the effects of US employment reports, which were much … END_OF_DOCUMENT_TOKEN_TO_BE_REPLACED