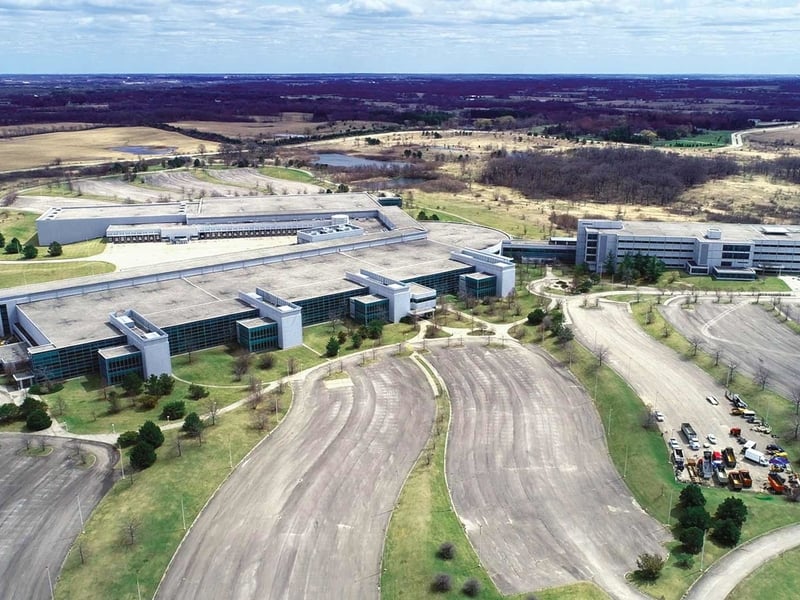 But the Green Data projects in Harvard and Murphysboro would be the first of their kind in the state. Bak touts them as an important economic development tool in parts of Illinois that need jobs.

Here’s the rub: Data centers, big buildings filled with servers and other computer gear, don’t employ many people. Bak’s project won’t come close to employing the 5,000 people who worked full-time at the Motorola campus back in the 1990s. Businesses that lease space in the building will provide jobs, but Bak declined to predict how many.

Harvard doesn’t have the luxury of being picky. Jobs notwithstanding, a redevelopment would boost the taxable value of the Motorola property and generate more property taxes for local governments, including its school district. Even though it’s empty now, the campus at 2001 N. Division St. is the biggest source of property tax revenue in Harvard, more than $300,000 annually, said Charles Eldredge, executive director of the Harvard Economic Development Corp.

“Anything that puts the building into productive use is a good thing,” he said. “The more employees, the better. Anything would be better than what’s going on now.”

But when it comes to Bak’s proposal, local officials are still in “show-me” mode.

“Conceptually, it would be great,” Eldredge said. “The city has had some conversations with him, but I don’t think anyone has seen a formal business plan with any specifics.”

Green Data is effectively a startup—its Illinois projects would be its first—one reason to be skeptical. But Bak is a veteran of the renewable energy industry, leading Vancouver-based Finavera Wind Energy, which developed wind projects in British Columbia and Ireland. Finavera, a public company, acquired Solar Alliance in 2015, taking its name in the process.

Solar Alliance, meanwhile, is a penny-stock company—its shares are trading for about 25 cents in U.S. dollars—and it has a stock market capitalization of just $66 million. It recently completed solar projects at a Maker’s Mark distillery in Kentucky and one for Bridgestone Americas in South Carolina totaling 2.4 megawatts, its largest project to date.

Solar Alliance CEO Myke Clark did not return a call. In recent months, the firm has disclosed plans for a 56-megawatt project in Illinois without specifying its precise location.

Over the past 18 years, local officials have fielded a multitude of inquiries from investors interested in taking over the former Motorola cellphone plant. One proposed turning it into a water park. Another suggested converting it into prison.

Then along came Xiao Hua “Edward” Gong, a Chinese-Canadian businessman who bought the property for $9.3 million in 2016. He said he planned to make smartphones there but ran afoul of the law. In December 2017, Canadian authorities charged Gong over his alleged role in a fraud and money-laundering case involving the sale of hundreds of millions of dollars of securities to Chinese citizens.

The criminal case, which remains pending, resulted in more delays and frustration for local officials, but last September, Canadian authorities allowed the U.S. Marshals Service to put the property up for sale. Gong also owns a Rosemont hotel and the Pittsfield Building in downtown Chicago, another property that has suffered from neglect.

Local officials welcomed the decision to sell the Harvard property, but they’re still wondering whether Green Data will close on its deal.

In a court hearing yesterday over a pending lawsuit regarding the property, an attorney for the U.S. Department of Justice told a judge that the closing date had been extended to July 16 or 19 from mid-May. The attorney, Mary Butler, added that the buyer, who she declined to identify, had made a non-refundable deposit and agreed to pay the $54,000 in property taxes owed for the extra time.

“I think that brings us further than we’ve ever been with respect to this property,” McHenry County Judge Thomas Meyer said at the hearing.

“We have hard money in the project. We’re committed to close,” Bak told Crain’s, declining to disclose the size of the deposit or the sale price.

But he still has some big hurdles to cross. After years of neglect, the Motorola buildings have a major mold problem that needs to be addressed, and he still has to work out a financial assistance package with Illinois officials.

“We’re certainly going to be approaching the state for some support to turn this into a technology center,” Bak said.

He declined to say how much Green Data would seek from the state. Rep. Reick, who has discussed incentives with Bak, also declined to provide a figure, saying only that it’s “a big number.” Reick sent Bak a letter months ago asking for more specifics about the proposed project. He hasn’t received a response.

“They have an obligation at this point to make it plain to the people of McHenry County as to what their intentions are,” Reick said.

As signs that the second wave of COVID-19 is beginning to wane and travel restrictions loosen, foreign investors are looking to return to the U.S., … END_OF_DOCUMENT_TOKEN_TO_BE_REPLACED

Wall Street stocks continued to rise while government bonds softened as investors addressed the effects of US employment reports, which were much … END_OF_DOCUMENT_TOKEN_TO_BE_REPLACED