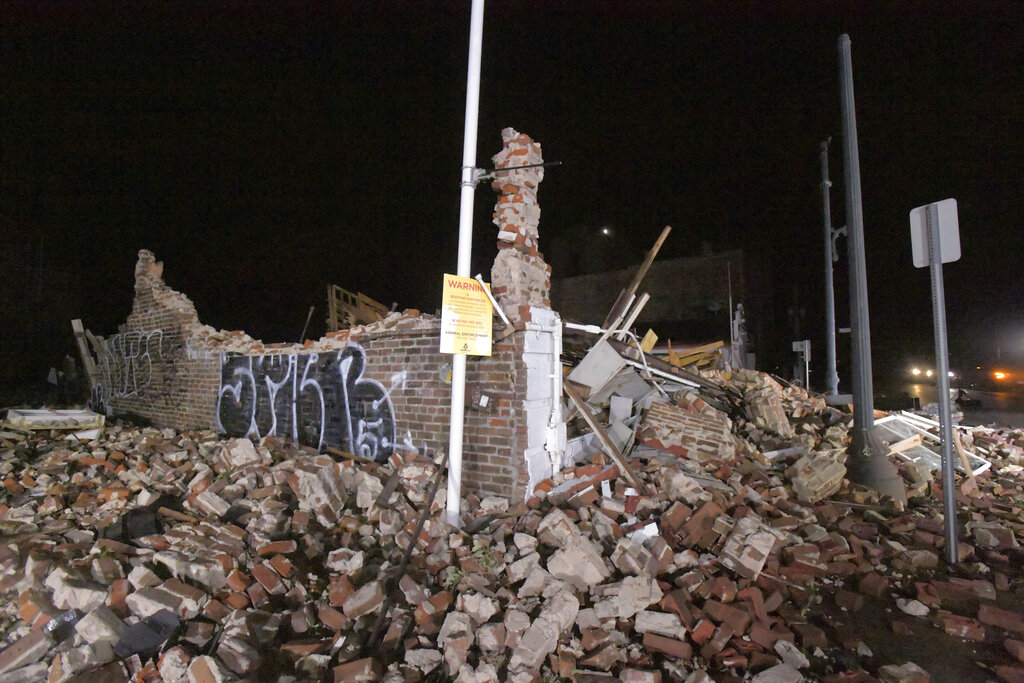 by: via Nexstar Media Wire, The Associated Press

WASHINGTON (AP) — Hurricane Ida is sure to take a toll on the energy, chemical and shipping industries that have major hubs along the Gulf Coast, but the impact on the overall U.S. economy should be modest so long as damage estimates don’t rise sharply and refinery shutdowns are not prolonged, economists suggested.

Ida, which made landfall Sunday, is tied it for the fifth-strongest hurricane to ever hit the mainland. More than a million customers in Louisiana and Mississippi were without power Monday according to PowerOutage.US, which tracks outages nationwide.

Oil prices weren’t showing a spike in reaction to Ida on Monday even as the storm raged. Prices on the New York Mercantile Exchange were flat, down a bare 0.1% at $68.69 per barrel.

Mark Zandi, chief economist at Moody’s Analytics, said Sunday the disruptions caused by Ida will likely lead him to downgrade his forecast for annual U.S. economic growth in the current July-September quarter by a few tenths of a percentage point. But that economic loss, he said, could be reversed in the final quarter of the year as a result of the rebuilding from the hurricane’s damage that will likely follow.

Analysts at Citi Investment Research said the drag to GDP growth will be offset by subsequent reconstruction. However, they warned that “inflationary effects may be more persistent as demand for building materials, autos and workers will confront already existing shortages.”

Zandi said he expects the nation’s gross domestic product — its total output of goods and services — to grow at a 6.5% annual rate in the second half of this year, matching the average growth of the first six months. Still, besides the impact of Ida, Zandi noted that the highly contagious delta variant of the coronavirus poses risks to the economic outlook, depending on how much it leads Americans to slow their spending on travel, restaurant meals or other forms of spending.

“The key channel for Ida to impact the broader economy is through energy prices,” Zandi said. “We will have to see how much damage occurred to production in the Gulf and how long that production will stay offline.”

A brief spike in gasoline prices could result, Zandi said, because of the production shutdowns.

“The worst-case scenario is Ida might add 10 cents to 20 cents to the price of a gallon of gas through September,” he said. But he suggested that the increase in pump prices might last for only a few weeks.

Chemicals and plastics companies located in the region also shut down, but analysts at Citi said the US chemical industry can handle summer storms better than winter freezes provided there is no sustained flooding that can damage electrical stations.

Brian Bethune, an economist at Boston College, cautioned that the gas price increases could be more severe depending on how long the production shutdowns last and whether other regions have alternative supplies. He noted that after the hack of the Colonial Pipeline earlier this year, some states saw prices rise sharply as service stations ran out of gas.

S&P Global Platts said Sunday that government statistics show that 95% of oil and gas production in the Gulf Coast region was shut down as Ida made landfall. In addition, Platts said that nearly 4.4 million barrels per day of operating refinery capacity in the path of Ida, primarily in Louisiana, had been taken offline before the hurricane blew ashore Sunday afternoon.

“Many plants have been hardened against hurricanes, but disruptions in operations are still very likely due to flooding, power outages and personnel dislocations,” Platts analysts said.

While Ida made landfall on the 16th anniversary of Hurricane Katrina, with higher wind speeds, Ida is expected to have a less severe financial impact due to a lower storm surge and New Orleans’ improved levee system, which is better able to withstand storm surges. Analysts at Boenning & Scattergood also noted that Ida’s wind-field is smaller than Katrina, another factor that may narrow the area of catastrophic damage. The analysts estimated that losses for the insurance industry will hit around $10 billion. That compares with over $90 billion in insured losses from Katrina.

As signs that the second wave of COVID-19 is beginning to wane and travel restrictions loosen, foreign investors are looking to return to the U.S., … END_OF_DOCUMENT_TOKEN_TO_BE_REPLACED

Wall Street stocks continued to rise while government bonds softened as investors addressed the effects of US employment reports, which were much … END_OF_DOCUMENT_TOKEN_TO_BE_REPLACED