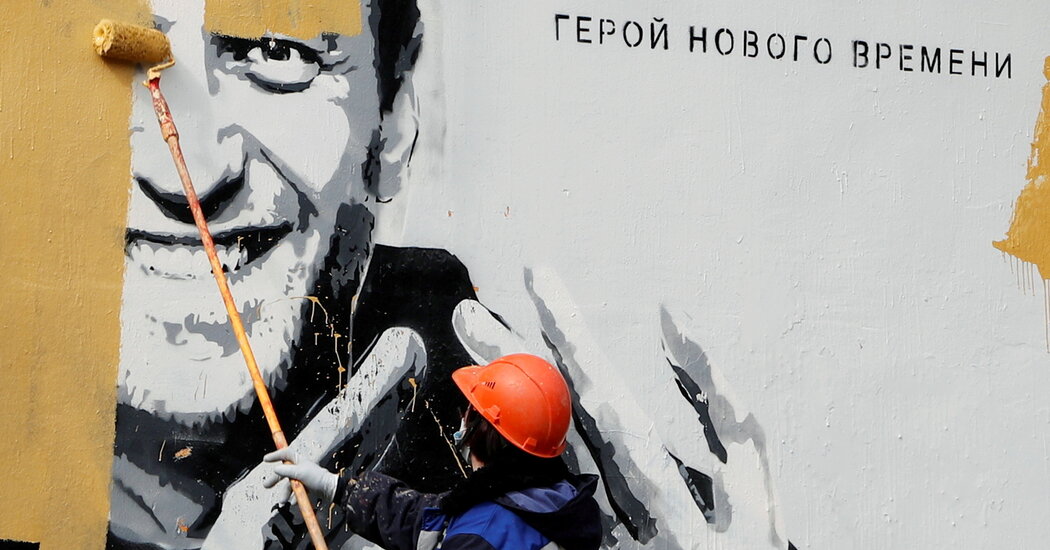 MOSCOW — A legal ban on Russia’s leading opposition group. The attempted assassination of a Kremlin critic followed by his imprisonment. Near-blanket prohibitions on street protests. A tightening crackdown on independent media.

Russian domestic politics have taken a hard turn over the past year — perhaps, as some say, because of the leadership’s fear of economic discontent or, as others suggest, a consolidation of power in the Kremlin by a clan of security officials.

President Biden has said he will object to the crackdown inside Russia when he meets with President Vladimir V. Putin for the two leaders’ first summit meeting, next week in Geneva.

Mr. Putin, for his part, has said Russia’s domestic affairs are not open for discussion, and in any case not so different from the political churn in other countries.

“Views on our political system can differ,” Mr. Putin told the heads of international news agencies last week. “Just give us the right, please, to determine how to organize this part of our life.”

What is the Russian opposition?

Before this year, Russia’s political system had been described as “soft authoritarianism.” It allowed space for criticism and a mostly free internet, in contrast to China, but left no viable path for opposition figures to win power through elections.

Russian analysts and politicians alike had divided the opposition into two categories: “systemic” and “non-systemic.”

The “systemic” opposition comprises parties in Parliament widely understood to be controlled behind the scenes by Mr. Putin’s domestic political advisers in the Kremlin.

They champion local causes and even campaign aggressively against politicians in the governing party in local, regional and parliamentary elections. Politicians in these parties have at times swiveled to boldly challenge the Kremlin — but this typically leads to their expulsion from the parties, arrest or exile.

The smaller, beleaguered “non-systemic” opposition, in contrast, openly has challenged Mr. Putin’s rule and called for him to be voted out of office. Its members have struggled to get candidates on the ballot and have faced blacklisting by state media.

What changed this year was a sweeping away of the “non-systemic” opposition and its leader, Aleksei A. Navalny, who narrowly survived a poisoning attempt last year and was subsequently imprisoned.

When criticized, how does the Kremlin respond?

Russian government officials typically point to the nominal opposition parties in Parliament that in fact support Mr. Putin. They have flourished. These parties hold 114 seats in Russia’s 450-seat Parliament.

The Communist Party, for example, openly espouses an even more thorough return to Soviet-style rule. The Liberal Democratic Party and its lightning-rod leader, Vladimir Zhirinovsky, promote a populist, nationalist agenda.

Such “systemic” parties also fill right-wing and pro-business niches and even promote policies that overlap with those promoted by the repressed true opposition.

A new party called New People, for example, has promoted reforms appealing to Russia’s emerging, urban middle class in much the same way Mr. Navalny’s group has, with the distinction that it does not directly criticize Mr. Putin or call for an end to his more than 20-year rule as president or prime minister.

In his comments to news agencies before the Geneva meeting, Mr. Putin suggested that he saw signs of the marginalization of opposition in America, too.

“Take a look at the sad events in the United States where people refused to accept the election results and stormed the Congress,” Mr. Putin said. “Why is it only our non-systemic opposition that you are interested in?”

What do opposition figures face in Russia?

Prosecutors had for years harried Mr. Navalny and other opposition leaders and detained them for short terms under pretexts such as violation of rules on public gatherings or under laws unrelated to their political activities.

These legal screws have tightened for years. Mr. Navalny, for example, faced so many serial detentions for minor violations that once he walked out of jail to find police officers waiting to arrest him on another charge.

Behind the scenes, according to Western governments and rights groups, the Kremlin had gone further: assassinating or driving into exile journalists, dissidents and leaders of the political opposition.

The opposition activist Vladimir Kara-Murza, for example, was twice poisoned with still undetermined toxins that sent him into comas that lasted days, and left him with lingering neurological ailments.

Mr. Navalny narrowly survived an assassination attempt with a chemical weapon last summer. In 2015, another opposition leader and a former first deputy prime minister of Russia, Boris Y. Nemtsov, was shot and killed with a pistol. Officials deny any role in those actions.

Does the opposition stand a chance of unseating Mr. Putin?

Not in the near future. Members of the opposition view the short-term prospects for political change as limited, but they keep alive the post-Soviet promise of a democratic Russia.

Midlevel opposition figures, including several in Mr. Navalny’s organization, remain active and defiant. Mr. Navalny himself chose imprisonment in Russia over exile when he returned from medical treatment in Germany this year, facing certain arrest.

A severe blow to Mr. Navalny’s movement came on the eve of the summit between Mr. Putin and Mr. Biden, all but certainly occurring with the approval of the Kremlin, in a signal that Mr. Putin will not bow to foreign pressure. A court in Moscow this week banned Mr. Navalny’s nationwide political organization as extremist.

The move will drive anyone supporting Mr. Navalny to cease their political activities or go underground or into exile. This legal dismantlement of an opposition group marked a new phase of a crackdown on dissent, relying on a formal process rather than on pretexts as before.

Mr. Putin has remained popular with many Russians, though independent polling has shown some slump in his ratings beginning in 2018, as the economy stagnated.

Hard-liners then sought to guarantee stability with an iron fist, some analysts say, a task made more urgent last year by the possibility of pandemic-related unrest and the looming parliamentary elections scheduled for September.

Still, the current crackdown, expected to come up at the summit meeting next week, is not a sharp break with history: Russia held its last national election deemed by international observers to be free and fair nearly 20 years ago, with a parliamentary vote in 2002.

As signs that the second wave of COVID-19 is beginning to wane and travel restrictions loosen, foreign investors are looking to return to the U.S., … END_OF_DOCUMENT_TOKEN_TO_BE_REPLACED

Wall Street stocks continued to rise while government bonds softened as investors addressed the effects of US employment reports, which were much … END_OF_DOCUMENT_TOKEN_TO_BE_REPLACED