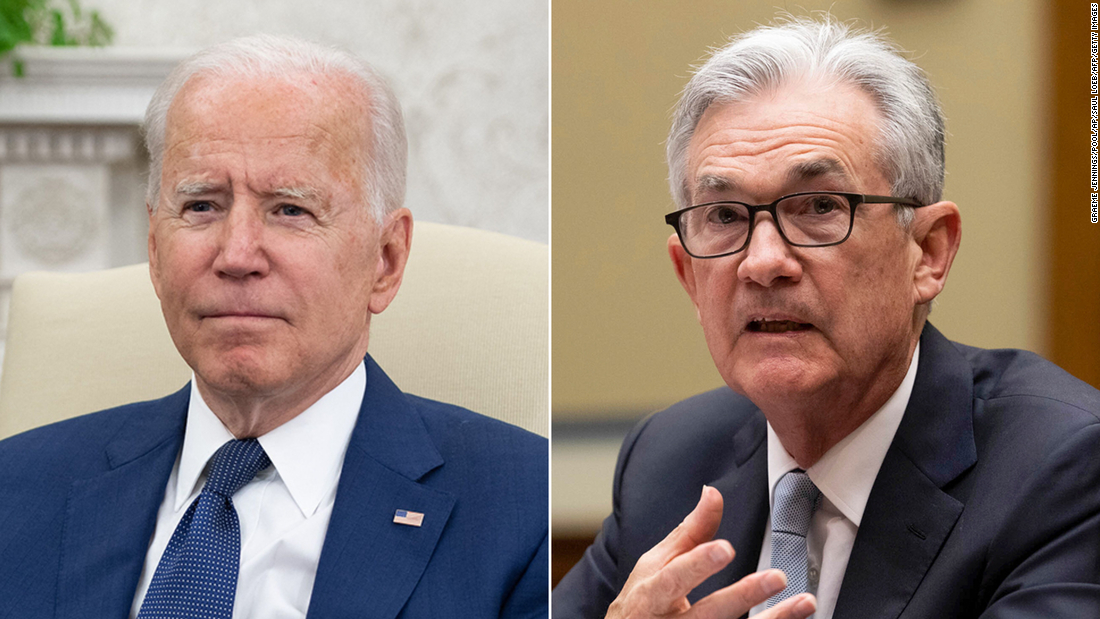 But the stakes couldn’t be much higher here. If the consensus is wrong (as it sometimes is) and inflation remains uncomfortably high, it could threaten the economic recovery, the stock market boom and even the Biden agenda.

“It still screams transitory to us,” said Stephanie Roth, senior markets economist at JPMorgan Private Bank. “If we’re wrong, it could shorten the economic cycle that we’re in.”

In other words, the Fed would need to cool inflation off by swiftly raising interest rates. Higher borrowing costs would slow or even derail the economic recovery.

At the same time, high inflation and higher rates would make it harder for President Joe Biden to enact sweeping infrastructure and social safety net programs costing more than $4 trillion.

“The Fed is playing a game of chicken that they’re going to lose,” said Peter Boockvar, chief investment officer at Bleakley Advisory Group. “I think the Fed will be wrong on inflation being temporary.”

Boockvar said the Fed should move soon to exit its emergency stance because waiting too long will make it that much harder to ease inflation without slowing the economy.

“They don’t want to be playing catch-up,” he said.

Some leaders on Wall Street, including BlackRock (BLK) CEO Larry Fink and JPMorgan Chase (JPM)boss Jamie Dimon, have similarly warned in recent weeks that inflation may not be temporary.

The good news is that inflation fears have eased a bit in recent weeks, although not necessarily for positive reasons.

The summer spike in Covid-19 cases, driven by the Delta variant, threatens to slow the booming economy. That in turn would cool off surging demand, suggesting inflationary pressures could ease, at least in the short run.

In fact, Covid variants have surpassed inflation as the top risk facing markets, according to a July 21-23 survey of market professionals released by Deutsche Bank on Monday.

“The risks have shifted toward growth being more disappointing than expected. That gives me confidence that inflation shouldn’t be a problem,” said JPMorgan’s Roth.

She pointed to how the recent spike in consumer prices is being driven mostly by several factors like used cars that are already showing signs of cooling off.

“When you strip those components out, inflation looks far less scary,” Roth said.

The International Monetary Fund is urging central bankers not to overreact to a few months of hot prices.

“Central banks should generally look through transitory inflation pressures and avoid tightening until there is more clarity on underlying price dynamics,” the IMF said in a new report Tuesday.

However, the IMF acknowledged there is a “risk that transitory pressures could become more persistent and central banks may need to take preemptive action.”

‘We are raising prices everywhere’

Some leading companies signaled Tuesday that they are passing rising costs along to consumers, suggesting at least some inflation will stick around.

Sherwin-Williams (SHW) said it is confident it can offset higher costs through its previously-announced price hikes. “We are prepared to implement additional increases should they become necessary,” Morikis said. To mitigate the impact of rising costs, General Electric (GE) said it is raising prices “across the board” and taking other steps.Executives at Post-It maker 3M (MMM) simply said, “We are raising prices everywhere.”

None of those comments help the transitory inflation case.

Liz Young, head of investment strategy at SoFi, thinks inflation will cool off, yet settle into a level high enough that they force the Fed to act sooner than people expect.

“The assumption that the Fed won’t raise rates until 2023 is way too far off,” Young said.

Indeed, traders now see a 51% chance of at least one interest rate hike by the end of next year, according to the CME’s FedWatch Tool.

‘There’s a lot to be humble about’

Another risk is that high inflation slows the economy down.

There was a whiff of stagflation in the latest housing numbers. With sticker shock pricing some Americans out of the market, new home sales unexpectedly fell in June for the third month in a row, slipping to the weakest pace since April 2020. Existing home sales declined four months in a row before ticking up in June.

A similar story is playing out in the auto market, where sales have slowed after months of blistering price gains.

Stagflation, defined as a period of slow growth and rising prices, is a nightmare for central bankers because both rate hikes and rate cuts can make one part of the problem worse.

Hopefully stagflation concerns are overdone and inflation eases in the coming months, as the Fed expects. That would allow the recovery to continue and the United States to move closer to full employment.

But it’s also important to remember that economic forecasts, including ones from the Fed, can turn out to be very wrong.”There’s a lot to be humble about,” Fed Chairman Jerome Powell said last month. “It’s a highly uncertain business.”
View Original Source

As signs that the second wave of COVID-19 is beginning to wane and travel restrictions loosen, foreign investors are looking to return to the U.S., … END_OF_DOCUMENT_TOKEN_TO_BE_REPLACED

Wall Street stocks continued to rise while government bonds softened as investors addressed the effects of US employment reports, which were much … END_OF_DOCUMENT_TOKEN_TO_BE_REPLACED