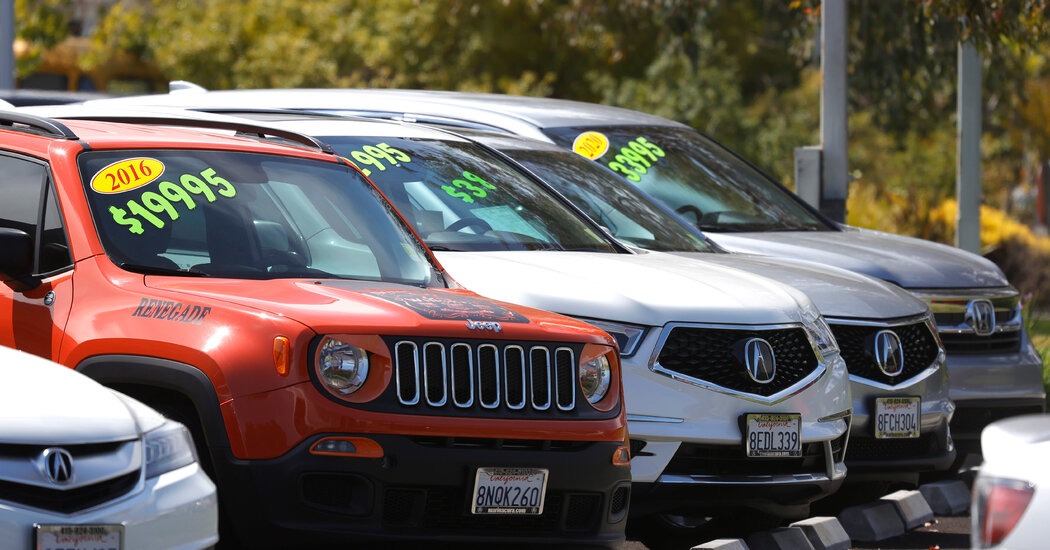 Here’s a riddle: What is both too hot and too cold? The answer: the United States economy in the summer of 2021.

That is the common thread that comes through in economic data; shifts in financial markets; anecdotes from businesses; and experiences of ordinary people who are simultaneously enjoying higher incomes and facing higher prices and shortages.

In the mid-2021 economy, employers are offering higher pay to attract scarce workers; airports and car lots are bustling; and a G.D.P. report due out next week will probably show blockbuster growth. It is also an economy in which inflation is outstripping pay gains for many workers; the share of the population working remains far below prepandemic levels; and bond markets are priced at levels that suggest a high risk of returning to sluggish growth in the years ahead.

Essentially, the economy is having a harder time rebooting itself than had seemed likely in the heady days of spring, when many Americans were getting vaccinated and stimulus payments hit checking accounts.

The Biden administration and the Federal Reserve are betting that they can achieve a smooth transition to an economy that enjoys prosperity without frustratingly high inflation. But for that to happen, a huge mismatch — between economywide demand for goods and services, and the supply of them — will need to be resolved. It’s not clear how long that will take.

“I think we should have expected there to be frictions in getting the economy reopened after this unprecedented shock,” said Karen Dynan, a Harvard economist and a former official at the Federal Reserve and Treasury. “We’ve seen serious frictions, and it’s totally reasonable to expect those frictions to continue.”

But businesses have had a harder time increasing production to fulfill that demand than forecasters were expecting in the spring. This has been particularly glaring in the case of cars, where a shortage of microchips has constrained production.

But supply shortages are evident across all sorts of industries. The latest survey of manufacturers from the Institute for Supply Management cites complaints from makers of furniture, chemical products, machinery and electrical products about the difficulties of fulfilling demand.

That is generating price inflation steep enough to make it ambiguous whether wage increases are truly leaving workers better off. Average hourly earnings in the private sector rose slower than the Consumer Price Index in each of the first six months of the year.

Because of the unique circumstances of the post-pandemic reopening, those numbers most likely understate the pay increase a typical worker has experienced, but the gist is clear: Workers are gaining higher wages, yes, but also paying more for the things they buy.

Much of this appears to be “transitory” inflation pressures that are set to diminish, and in some cases reverse. Bottlenecks are set to resolve — lumber prices have fallen sharply in recent weeks, for example, and used car prices may finally be stabilizing at high levels. But there are also slower-moving effects that could reduce a dollar’s purchasing power for months to come.

Rents are starting to rise sharply, according to a range of data sources. And businesses facing higher prices for supplies and labor may be in the early stages yet of passing on those higher costs to consumers. The Producer Price Index, which tracks the costs of the supplies and services that companies buy, rose 1 percent in June, an acceleration from April and May. This is a signal that inflationary forces may still be working their way through the economy.

“We call it a whiff of stagflation,” said Paul Ashworth, chief U.S. economist at Capital Economics, using the term for a combination of stagnant growth and inflation. “Real growth isn’t weak, but it’s just not as strong as we thought it was going to be. There was a lot of optimism, and now things are coming back to earth a little bit.”

The labor market is the clearest example of a market that is simultaneously too hot and too cold.

Businesses are complaining of labor shortages and offering all kinds of inducements to attract workers. Yet the unemployment rate is a recession-like 5.9 percent. And the share of adults in the labor force — either working or looking for work — has been essentially flat for months, failing to make clear progress to return to its prepandemic level. It was 63.3 percent in February 2020 but has bounced around between 61.4 percent and 61.7 percent for more than a year.

Individuals may be making rational choices for themselves not to work. Older workers may be retiring a few years early, for example, or families may be deciding to get by on one income instead of two. But in the aggregate, the depressed levels of labor force participation will limit the productive potential of the economy.

Hanging over it all is great uncertainty over whether the Delta variant of the coronavirus will create a new wave of disruptions to commerce — both domestically and overseas in places with less vaccine availability. That concern has helped cause big swings in global financial markets, which are increasingly priced in ways suggesting the years ahead will be less the roaring 2020s and more similar to the sluggish 2010s.

In the first three months of the year, longer-term bond yields soared and the yield curve — which charts the difference between shorter-term and longer-term interest rates — steepened. Those both tend to be indicators that investors expect higher growth rates ahead.

That has reversed in recent weeks. The 10-year Treasury yield was 1.22 percent Tuesday, down from 1.75 percent at the recent high at the end of March.

Where does all that leave the too-hot, too-cold U.S. economy? A lot of work has been done to enable the economy to reopen, and there is no shortage of demand from Americans who are feeling flush. But until the economy can find a new equilibrium of prices, wages, output and demand, things aren’t going to feel just right.

As signs that the second wave of COVID-19 is beginning to wane and travel restrictions loosen, foreign investors are looking to return to the U.S., … END_OF_DOCUMENT_TOKEN_TO_BE_REPLACED

Wall Street stocks continued to rise while government bonds softened as investors addressed the effects of US employment reports, which were much … END_OF_DOCUMENT_TOKEN_TO_BE_REPLACED