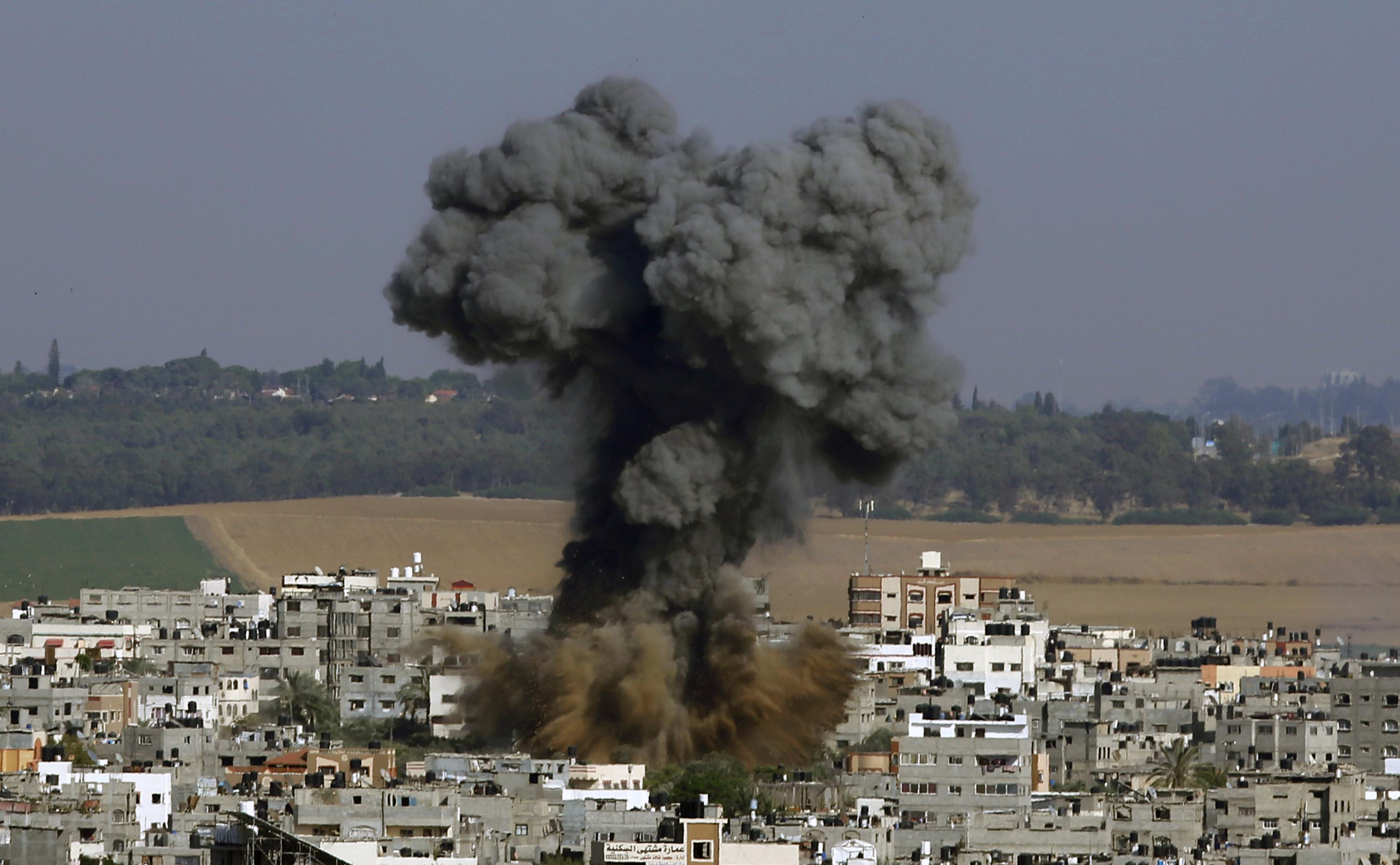 JERUSALEM (AP) — Israel on Tuesday stepped up its attacks on the Gaza Strip, flattening a high-rise building used by the Hamas militant group and killing at least three militants in their hideouts as Palestinian rockets rained down almost nonstop on parts of Israel.

It was the heaviest fighting between the two bitter enemies since 2014, and it showed no signs of slowing.

Three women in Israel were killed by rocket fire, and dozens of people wounded. The death toll in Gaza rose to 35 Palestinians, including 10 children, according to the Health Ministry. Over 200 people were wounded.

In another sign of widening unrest, demonstrations erupted in Arab communities across Israel, where protesters set dozens of vehicles on fire in confrontations with police.

The fighting between Israel and Hamas was the most intense since a 50-day war in the summer of 2014. In just over 24 hours, the current round of violence, sparked by religious tensions in the contested city of Jerusalem, increasingly resembled that devastating war.

The booms of Israeli airstrikes and hisses of outgoing rocket fire could be heard in Gaza throughout the day, and large plumes of smoke from targeted buildings rose into the air. Israel resumed a policy of airstrikes aimed at killing wanted militants and began to take down entire buildings — a tactic that drew heavy international criticism in 2014.

In Israel, the nonstop barrages of rocket fire left long streaks of white smoke in their wake, while the explosions of anti-rocket interceptors boomed overhead. Air-raid sirens wailed throughout the day, sending panicked residents scurrying for cover.

In a nationally televised address, Netanyahu said that Hamas and the smaller Islamic Jihad militant groups “have paid, and I tell you here, will pay a heavy price for their aggression.”

He claimed that Israel had killed dozens of militants and inflicted heavy damage on hundreds of targets.

“This campaign will take time,” he said. “With determination, unity and strength, we will restore security to the citizens of Israel.”

He stood alongside Defense Minister Benny Gantz, a political rival, in a show of unity. “There are lots of targets lined up. This is only the beginning,” Gantz said. The military said it was activating some 5,000 reservists and sending troop reinforcements to the Gaza border.

The current violence has coincided with the Muslim fasting month of Ramadan, a time of heightened religious sentiments.

Critics say heavy-handed Israeli police measures in and around Jerusalem’s Old City helped stoke nightly unrest. Another flashpoint has been the east Jerusalem neighborhood of Sheikh Jarrah, where dozens of Palestinians are under threat of eviction by Jewish settlers.

On Monday evening, Hamas began firing rockets from Gaza. From there on, the escalation was rapid.

Palestinian health officials gave no breakdown on the death toll in Gaza, but Islamic Jihad confirmed that three senior commanders were killed in a strike on their hideout in a Gaza City apartment building. The Health Ministry said 10 children and a woman were also killed.

Netanyahu said Israel had attacked hundreds of targets. The fiercest attack was a set of airstrikes that brought down an entire 12-story building. The building housed important Hamas offices, as well as a gym and some start-up businesses. Israel fired a series of warning shots before demolishing the building, allowing people to flee and there were no casualties.

Fighter jets struck the building again after journalists and rescuers had gathered around. There was no immediate word on casualties. The high-rise stood 200 meters (650 feet) away from the Associated Press bureau in Gaza City, and smoke and debris reached the office.

Soon after the bombing, Hamas announced that it would resume its attacks and aimed 100 rockets at the Israeli desert town of Beer-Sheva. Hamas said the renewed barrage was in response to the strike on the building.

The Israeli military said hundreds of rockets were launched toward Israel. Two women, including an Indian caregiver, were killed in separate rocket strikes in the southern city of Ashkelon.

Then, late at night, Hamas said it unleashed a barrage of 130 rockets toward Tel Aviv in response to the destruction of the high-rise. As the rockets rose into the skies, mosques across Gaza blared with chants of “God is great,” “victory to Islam” and “resistance.”

One rocket killed a woman in the city of Rishon LeZion, and another struck a bus in the nearby city of Holon, wounding three people, including a young girl.

The violence was beginning to spill over to Israel’s own Arab population, where angry demonstrations erupted across the country.

In the central city of Lod, thousands of mourners joined a funeral for an Arab man killed by a suspected Jewish gunman the previous night. The crowd clashed with police, and set a synagogue and some 30 vehicles, including a police car, on fire, Israeli media reported. Paramedics said a 56-year-old man was seriously hurt after his car was pelted with stones.

The city’s mayor, Yair Revivo, described the situation in the mixed Jewish-Arab city as “civil war,” and the government ordered a deployment of paramilitary border guards from the West Bank to Lod.

In neighboring Ramle, ultra-nationalist Jewish demonstrators were filmed attacking cars belonging to Arabs. In the norther port town of Acre, protesters torched a Jewish-owned restaurant and hotel. Police arrested dozens of others at Arab protests in other towns.

Diplomats sought to intervene, with Qatar, Egypt and the United Nations working to deliver a cease-fire. All three serve as mediators between Israel and Hamas.

The U.N. Security Council planned to hold its second closed emergency meeting in three days Wednesday on the escalating violence, an indication of growing international concern. Council diplomats, speaking on condition of anonymity because discussions have been private, said the U.N.’s most powerful body did not issue a statement because of U.S. concerns that it could escalate tensions.

The escalation comes at a time of political limbo in Israel.

Netanyahu has been caretaker prime minister since an inconclusive parliamentary election in March. After failing to form a coalition government by a deadline last week, his political rivals have now been given the opportunity.

The support of an Arab-backed party with Islamist roots is key for the anti-Netanyahu bloc. But the current tensions might deter the party’s leader, Mansour Abbas, from joining a coalition with Jewish parties, at least for the time being.

The sides have three more weeks to reach a deal. If they fail, Israel would likely be plunged into an unprecedented fifth election campaign in just over two years.

As signs that the second wave of COVID-19 is beginning to wane and travel restrictions loosen, foreign investors are looking to return to the U.S., … END_OF_DOCUMENT_TOKEN_TO_BE_REPLACED

Wall Street stocks continued to rise while government bonds softened as investors addressed the effects of US employment reports, which were much … END_OF_DOCUMENT_TOKEN_TO_BE_REPLACED