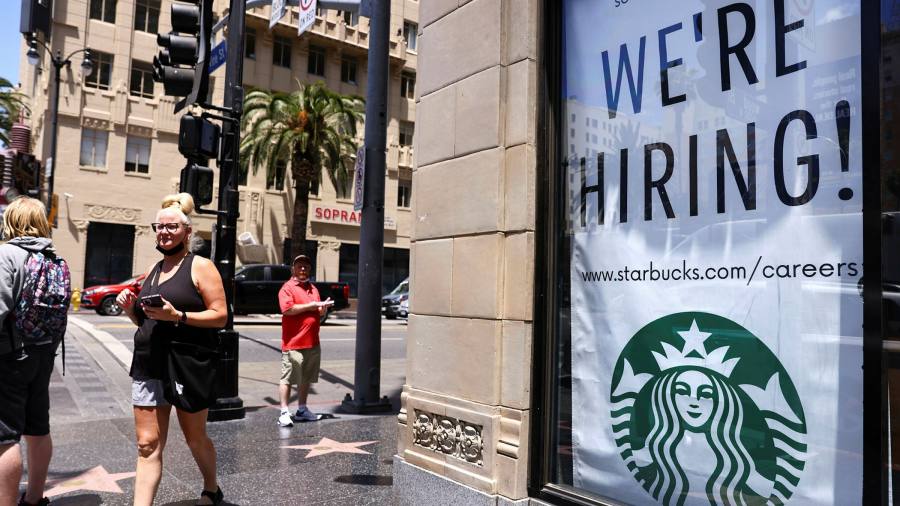 The writer is an FT contributing columnist

I’ve learned one invaluable lesson from the coronavirus pandemic: do not waste time trying to predict the future.

Just as I never thought I’d spend a year of my life stuck at home, nor would I have predicted what has happened as US pandemic restrictions eased. I assumed many Americans would struggle to find jobs after lockdown; instead, jobs are struggling to find people. Every aspect of post-pandemic life — and death — is affected by the labour shortage.

The cemetery where my late mother and brother are buried, and where I will also lie one day, sent out emails last week apologising for the tall grass and weeds cluttering the graves, saying they can’t hire enough workers to mow the lawns.

When my family ventured out for one of our first maskless meals, at a local Korean barbecue restaurant, we found only two harried staff serving dozens of diners (memo to chef: we never got our garlic pork cutlets).

Some municipal pools across the Midwest had to delay opening or cut hours due to a scarcity of lifeguards. And the Midwest’s premier amusement park, Cedar Point, had to close two days a week for most of June due to short staffing. Cedar Point doubled seasonal wages to $20 an hour and offered a $500 signing bonus to get its roller coasters rolling and dodgem cars crashing full time again.

Julio Cano, chief business officer of the Bien Trucha group, which owns Mexican-inspired restaurants outside Chicago, is offering $700 to employees who refer anyone for “back of house” jobs such as line cook or dishwasher. These now start at $15 an hour, compared with $12.50 or $13 pre-pandemic.

Cano, who has to close his restaurants for an hour on weekend afternoons so that employees can rest, says that other businesses are also suffering: local banks don’t have clerks and “the people who take care of the plants at one of our restaurants are having upper management come in to do it, instead of hourly workers”.

He worries about the long-term impact of this “bidding war”. “We are fighting for the same very limited pool of people, competing against Amazon and Target and losing our workforce to other industries,” he says.

Jeffrey Korzenik, chief investment strategist at Fifth Third Bank, says he is “shocked” by how quickly the shortage appeared. “I thought it would have taken until at least the end of this year,” he says, adding that additional unemployment insurance paid to jobless workers during the pandemic has “clearly played a role” in the shortages.

Economists say many minimum wage workers can earn as much by collecting augmented state and federal pandemic unemployment insurance as they can by working. (Full disclosure: some members of my family are drawing the expanded benefits). Many states are winding down the augmented unemployment benefits early.

But there are other reasons for the labour shortages, Korzenik says. “If you lost a job working at a department store on Chicago’s Magnificent Mile and the new jobs available are in Joliet [a suburb an hour away], that’s not always the right fit.” He adds that workers aged over 65 are also reluctant to re-enter the workforce, or retired during the pandemic, and that plays a role in the shortages.

“But it’s been a great year for teen unemployment,” he points out, noting that teens often don’t have unemployment benefits to fall back on, are less worried about falling ill with Covid-19 than older workers and seldom have to pay for childcare. The participation of 16 to 19-year-olds in the US workforce rose from a historic low of 20.9 per cent in April 2020 to 33.2 per cent last month.

But Cano says the teens he hires mostly do not want “back of house” jobs like dishwashing, and cemetery staff say graveyard jobs aren’t top of the list for many young people either. So adolescents can’t solve the worker shortage on their own.

“I’m fearful of where this is going to end,” Cano says. More workers may come back on the market when federal unemployment benefits end in September, “but I’m afraid we are creating a bubble . . . that is not sustainable”.

Then again, the future may surprise us. It has certainly happened before.

As signs that the second wave of COVID-19 is beginning to wane and travel restrictions loosen, foreign investors are looking to return to the U.S., … END_OF_DOCUMENT_TOKEN_TO_BE_REPLACED

Wall Street stocks continued to rise while government bonds softened as investors addressed the effects of US employment reports, which were much … END_OF_DOCUMENT_TOKEN_TO_BE_REPLACED