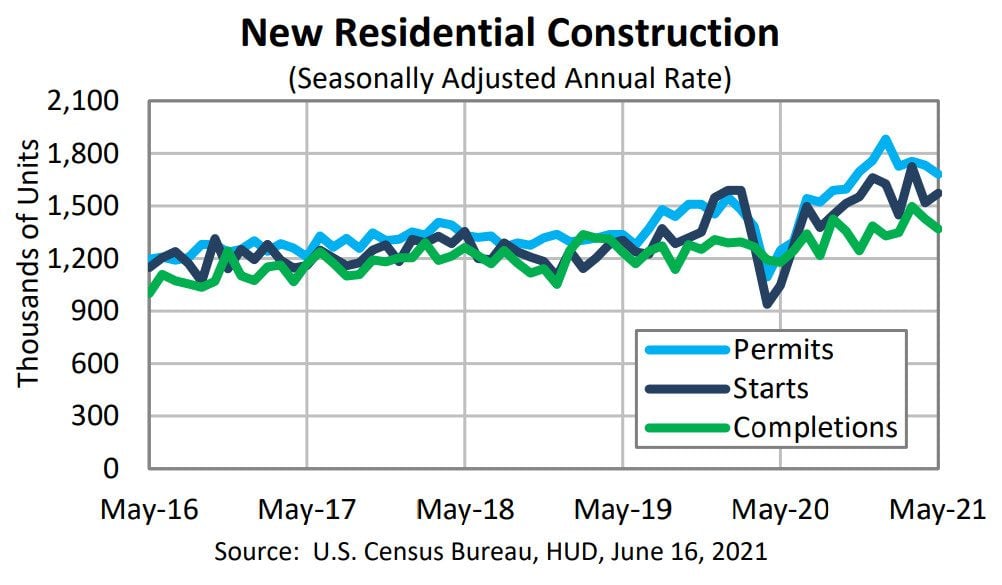 Buying a home right now is probably not the best idea. Five thousand real estate agents just clicked off of their web browsers, I know, but 64% of potential home buyers agree with me. Fannie Mae’s Home Purchase Sentiment Index for June reveals the big “turn off” this housing bubble has caused. The best move may be to wait a while until the housing market levels off or cools.

New home building permits are down, but completions seem to be buoying decreasing demand

The good news for those selling their homes is that the same report shows 77% of those surveyed saying it’s time to sell. Also, some reports indicate that the bidding wars are cooling off now, which could mean a gradual deflation of the real estate balloon some fear might burst any day now. Doug Duncan, Fannie Mae Senior Vice President, and Chief Economist, offered this:

“Consumers also continued to cite high home prices as the principal reason for their ongoing and significant divergence in sentiment toward homebuying and home-selling conditions. In addition, while all surveyed segments have expressed greater negativity toward homebuying over the last few months, renters who say they are planning to buy a home in the next few years have demonstrated an even steeper decline in homebuying sentiment than homeowners.”

Duncan went on to say affordability concerns are the main reason first-time homebuyers have chilled out on buying. However, he also says demand for housing seems stable now since relative stability in the economy and record low interest rates continue to buoy the bubble. Still, a recent Redfin report showed warring bid offers made to agents in June were at 65% compared to 74.1% back in April. For me, this indicates that supply and demand may be leveling out owing to potential buyers being priced out of the market and because new housing supply is gaining.

A June report from the U.S. Census seems to support my statement above. The report shows that April and May new housing completions beat expectations by as much as 16%. Building permits for may stood at 1,681,000, while housing starts and completions reached  1,572,000, and 1,368,000 respectively. As you can see from the chart above, we’ve not seen these numbers since before 2006. By next month the combination of demand factors and supply may start to drive down prices without the FED jockeying interest rates.

So, instead of a market bubble bursting, we will hopefully see a gradual deflation of the impossible boon that’s been going on. Barring any unforeseen economic variables, the U.S. real estate market will reach a kind of equilibrium in the Fall. The only problem I foresee is the fact that new housing permits have fallen off sharply. This means that demand may continue to exceed supply even with new buyers reconsidering purchasing their first homes. It looks like investors may be chilling as well. Only time will tell.

As signs that the second wave of COVID-19 is beginning to wane and travel restrictions loosen, foreign investors are looking to return to the U.S., … END_OF_DOCUMENT_TOKEN_TO_BE_REPLACED

Wall Street stocks continued to rise while government bonds softened as investors addressed the effects of US employment reports, which were much … END_OF_DOCUMENT_TOKEN_TO_BE_REPLACED