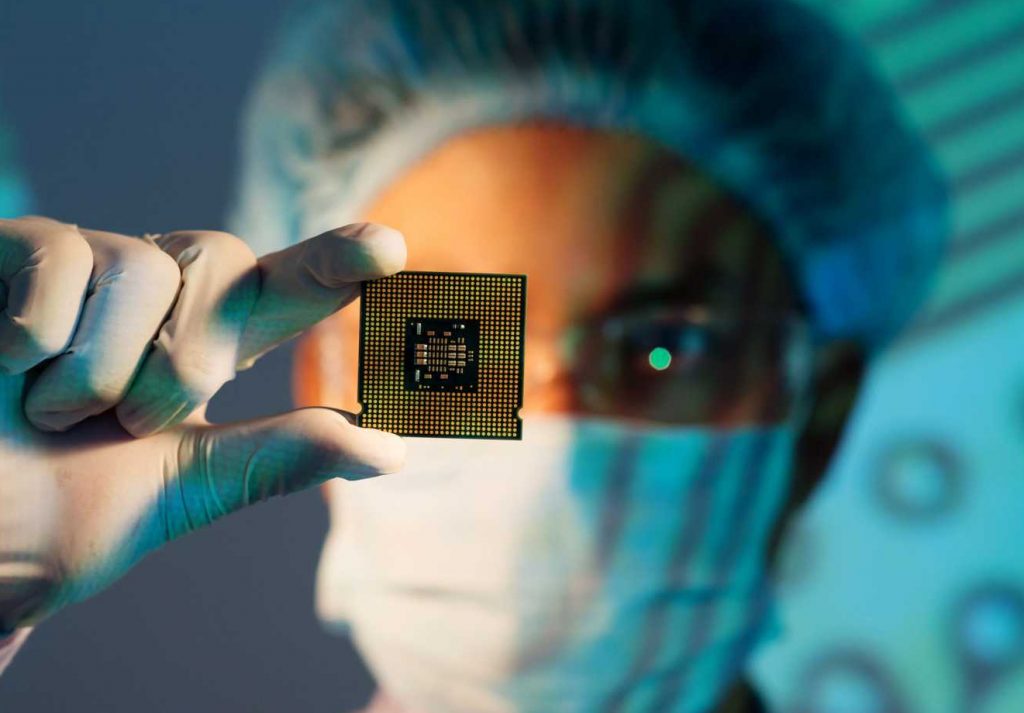 “In the obsession with balance sheets and inventory—or lack thereof—everyone’s inventory has been kept wafer thin for years,” said Lewis Black, CEO of Almonty, an international raw materials development company and the biggest tungsten operator outside of China.. “China stepped in and carried that inventory. They saw the business opportunity. Chinese industries built supply chains with the support of the Chinese government. They have enormous stockpiles.”

When the pandemic hit and supply chains broke down, the result was immediate and continuing shortages of strategic metals, semiconductor chips, high capacity batteries and other key components. China locked down first, creating a supply shock to the global economy. Then the United States and other regions locked down, causing a skyrocketing demand for certain manufactured goods as people who began working from home bought appliances, kayaks, bicycles, computers and other goods.

The result: global shipping imbalances with congested Chinese ports, empty containers in China because of no production, canceled passenger flights that meant no goods moving in the cargo holds, and air and ocean freight costs rising through the roof. Lead times quickly doubled to their normal levels. And more than a year after the pandemic started, lead times have only slightly improved – from 100% longer to about 80% longer, said Tom Derry, CEO of the Institute for Supply Management.

With that challenge in mind, President Biden issued an executive order earlier this year calling for a 100-day review of the nation’s supply chains, and for reports identifying risks in supply chains for semiconductor manufacturing, critical minerals and other strategic metals, pharmaceuticals and active pharmaceutical ingredients. Results were released earlier this month.

Key recommendations from the Biden Executive Order include:

“The very nature of the 100-day review called for in the Executive Order means the findings are essentially a foregone conclusion,” Derry said. “The U.S. economy and arguably our national security would be endangered without secure access to the four named subjects of the review: active pharmaceutical ingredients, rare earth minerals, semiconductors, and large capacity batteries.”

The findings were no surprise. The key question is: what happens next?

“This is a very good starting point,” Black said. “Everyone accepted what this report is going to reveal. There isn’t going to be a moment where you say, ‘I didn’t realize that.’ The question is: what do you do? This is a common-sense approach that does not lean exclusively on large corporations. But how much of this survives making its way through Congress?”

The report noted that U.S. allies and adversaries engage in industrial policy and urges the United States to do the same, especially for critical industries, particularly large-capacity batteries, active pharmaceutical ingredients,  and semiconductors, Derry said.

Findings recognize “that it is not realistic nor desirable for the United States to aim for self-sufficiency by creating purely domestic supply chains,” Derry said. “We will have to work with friendly third countries to coordinate in critical sectors to ensure we maintain adequate access to critical materials.”

Americans are only just beginning to understand how dependent the U.S. economy is on China for manufactured goods.  “For some products – some clothing items or stuffed toys – it’s not terribly important if supply is disrupted,” Derry said. “But for other items, our dependency creates both an economic security and national security challenge.”

Biden’s executive order is a strong reminder of the importance of so-called rare earth minerals, which aren’t are in the ordinary sense of the word but they have to be mined and many companies have slowed or ended mining operations for environmental and other reasons.

For example, rare earth minerals are abundant in the United States in the Carolinas and Wyoming, among other locations. “But are we willing to dig mines in the U.S.?” Derry asked.

“This (reluctance to dig and operate mines) has left China with a de facto monopoly on the global supply of rare earth minerals,” Derry said. “These metals are used in the manufacture of smartphones, computers, and advanced military systems. We can’t manufacture or maintain our supplies without them. The question policymakers face is whether it’s acceptable that the U.S. is in such a vulnerable position for such a necessary commodity? And if the answer is no, what are we prepared to do about it?”

“I find this difficult to envision given that we couldn’t agree to approve the Keystone XL pipeline to move petroleum from Canada to the United States,” Derry said. “New mines will face much resistance in this country, even if we put in place environmental safeguards.”

The findings reflect that national security concern, calling for the Department of Defense to get involved. The report recommends that the Department of Health and Human Services, the DoD, and other government agencies increase funding for advanced manufacturing technologies to advance continuous manufacturing and the manufacture of active pharmaceutical ingredients – the ingredients that cause intended results, known as APIs and mostly manufactured overseas.

The semiconductor shortage has encompassed multiple industries. In particular, automakers were hit hard.

The report recommends that Congress approve at least $50 billion in investments to advance domestic manufacturing of leading-edge semiconductors; expand capacity in mature node and memory production to support critical manufacturing, industrial and defense applications; and promote R&D to ensure the next generation of semiconductors is developed and produced in the United States.

“We used to think of semiconductors in laptops and smartphones,” Derry said. “Now they’re in everything, from your automobile to your smart refrigerator. The automotive industry is suffering from a self-inflicted problem. When worries about a global recession developed in March, OEMs cancelled their orders. Then, when they saw demand was steady or even increasing, they tried to reinstate their orders, only to find that they are not a major customer of semiconductor manufacturers and therefore they had lost their place in line. Automotive OEMs are used to being the big buyer in their markets and throwing their weight around. In this market, they are a secondary player. A lesson in humility for them.”

For example, Ford  has lowered production by half in the current quarter based on the semiconductor shortage, which has has started to show signs of easing slightly. In this case of semiconductors, carrying inventory doesn’t make sense because semiconductors change/improve every few months and are already out of date by the time they’re installed in a vehicle, he said.

“You can’t fix a semiconductor shortage overnight,” Black said. “Samsung is saying it will be at least 14 months until they catch up.”

Similar to the recommendation on semiconductors, the findings call for investing in the development of the next generation of batteries. The report called for the Energy Department and other federal agencies to support technologies that will reduce the requirements for critical or scarce minerals, including cobalt and nickel, for next generation electric vehicles and grid storage technologies and accelerating advances in next generation lithium ion, lithium metal batteries and solid-state design. The findings also called for developing processes to profitably recover spent lithium batteries, reclaim key materials, and re-introduce those materials to the supply chain.#

So what should be done?

Beyond the findings, policy options for the United States include industrial policy, where the federal government incentivizes or directs investment in specific industries, developing strategic alliances with third countries to assure supply of critical materials, tax and research and development incentives to encourage domestic manufacturing and supply, and/or creating national stockpiles – much as we did with the Strategic Petroleum Reserve after the Arab oil embargo of the 1970s, Derry said.

Black has advocated a national stockpile overseen by the Defense Logistics Agency. “The mechanism already exists,” he said. “The government already has a scheduled infrastructure for procurement warehousing through DLA and there are already rules that DLA can sell only to U.S. companies.”

Black envisions a federal investment of $50 billion to begin creating a stockpile of rare earth metals. Developing the supply would take eight to 10 years—not an easy or quick solution. With this approach, the federal government would award  five-year contracts to certain companies, the companies could take those contracts to banks or other lenders as the basis to borrow money, sell the metals to the federal government, which would in turn sell the metals to U.S. manufacturers. Once the contracts expired, those companies would have the infrastructure in places and would sell directly to manufacturers, possibly limited to U.S. manufacturers.

“The U.S. government may push further, restrictive conditions, such as borrowing money only from U.S. banks and selling only to U.S. manufacturers even after the stockpile contract expires, Black said.

“It certainly puts a line in the sand,” Black said. “It will certainly encourage friendly allied companies and domestic producers to step up their games. It’s a good solid start, creates a new industry, and means if you are in the semiconductor business and building in the United States you now have access to raw materials in the United States that you would otherwise have to buy from China.”

The initial government investment would be constantly turned over and replenished as the metals were sold, he said.

“You could develop a well thought out program of involving manufacturers without exposing taxpayers,” he said. “Ultimately you’re offering metals for sale not priced by the government or by the industry but by the market.”

Such a stockpile proposal could work, Derry said. “But the DLA does not have any natural advantages over any other buyer, other than potentially buying in large quantities,” he noted.

Black acknowledged that initially the U.S government would be starting its stockpile by buying from China . “The Chinese will delight in that possibility,” he said. But as the stockpile matured and U.S. and allied interests began production, that dependence would drop. “You are giving industry the tools to develop a supply chain,” he said.

Increasingly, military competition and economic competition are converging. “Serious people are now concerned with the not-entirely-impossible scenario of China staging a military invasion of Taiwan, which is home to about 20% of global semiconductor manufacturing.” Derry said. “It would be a big blow both to the U.S. economy and the U.S. military if such a scenario developed. It’s not only about being the dominant player in a critical economic sector – economic might equals military might.”

However the issue is resolved, “This whole process needs to be transparent,” Black said. “Keep the lobbyists and backroom dealers out of it.”

Derry called for free and fair markets as the best long-term conditions for economic health and prosperity. “The United States. needs a globally competitive tax policy for manufacturing as a starter,” he said. “More open immigration to allow talented people from all over the world to come to the U.S. where they want to work and contribute their knowledge and expertise to our economy.”

Even as some countries emerge from the pandemic, the supply chain issues are far from finished.

“What’s happened with this pandemic is that it has demonstrated clearly that if there is any out of the ordinary disruption to the supply chain, the ripple effect is extraordinary,” Black said. “We still haven’t seen all the ripples yet. I don’t think American manufacturers appreciate how difficult the next 18 months are going to be because of supply chain issues.”

As signs that the second wave of COVID-19 is beginning to wane and travel restrictions loosen, foreign investors are looking to return to the U.S., … END_OF_DOCUMENT_TOKEN_TO_BE_REPLACED

Wall Street stocks continued to rise while government bonds softened as investors addressed the effects of US employment reports, which were much … END_OF_DOCUMENT_TOKEN_TO_BE_REPLACED