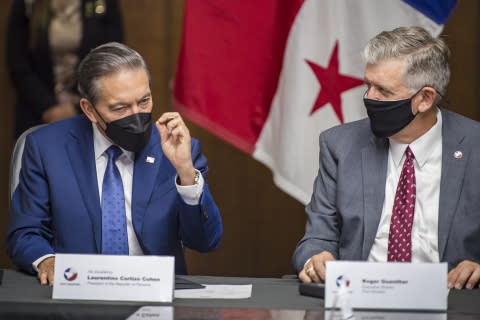 HOUSTON, July 16, 2021–(BUSINESS WIRE)–Mr. Laurentino Cortizo Cohen, President of the Republic of Panama, made a historic visit to Port Houston Thursday, highlighting the importance of the connection between the Panama Canal and the Houston Ship Channel. Panama is home to the Panama Canal. The 2016 expansion of the canal helped open new business opportunities and spurred the growth of Asia trade for Houston.

During a visit to Port Houston, Mr. Laurentino Cortizo Cohen, President of the Republic of Panama discusses with Port Houston Executive Director Roger Guenther, the importance of continued improvements to the Panama Canal and the Houston Ship Channel for continued trade growth and economic opportunities. Photo Credit: Port Houston

Last year Houston was ranked the #1 U.S. port in total tonnage, and import containers from East Asia have grown 63%, and export containers have increased 96% since 2016.

“Unquestionably, the expansion of the Panama Canal has had a significant role in the growth of cargo volume and the number of larger ships and vessels calling our port,” Executive Director Roger Guenther remarked. “That’s why we must continue to make strides with the expansion of the Houston Ship Channel – Project 11 to ensure that we can accommodate the larger ships and vessels, which means more jobs and greater economic impact to our region.”

For more than 100 years, Port Houston has owned and operated the public wharves and terminals along the Houston Ship Channel, including the area’s largest breakbulk facility and two of the most efficient and fastest-growing container terminals in the country. Port Houston is the advocate and a strategic leader for the Channel. The Houston Ship Channel complex and its more than 200 public and private terminals, collectively known as the Port of Houston, is the nation’s largest port for waterborne tonnage and an essential economic engine for the Houston region, the state of Texas, and the U.S. The Port of Houston supports the creation of nearly 1.35 million jobs in Texas and 3.2 million jobs nationwide, and economic activity totaling $339 billion in Texas – 20.6 percent of Texas’ total gross domestic product (GDP) – and $801.9 billion in economic impact across the nation. For more information, visit the website at www.PortHouston.com.

As signs that the second wave of COVID-19 is beginning to wane and travel restrictions loosen, foreign investors are looking to return to the U.S., … END_OF_DOCUMENT_TOKEN_TO_BE_REPLACED

Wall Street stocks continued to rise while government bonds softened as investors addressed the effects of US employment reports, which were much … END_OF_DOCUMENT_TOKEN_TO_BE_REPLACED