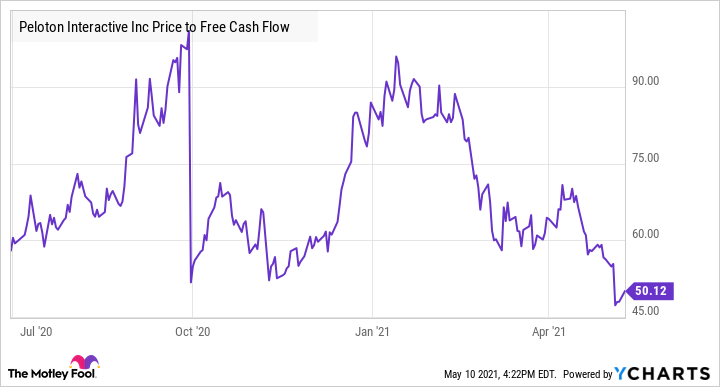 Share prices of Peloton Interactive (NASDAQ:PTON) and Etsy (NASDAQ:ETSY) are both down big over the last month, but for different reasons.

Peloton reported another great quarter, as engagement with its connected fitness products surged. However, the company on May 5 issued a recall of its treadmills after incidents surfaced of injuries and one death of a child. It sounds awful, but there are a few reasons why I believe Peloton will be fine in the long run.

Etsy also reported a strong quarter, but the stock price is down after management issued lower-than-expected revenue guidance for the second quarter. The shares are now as cheap as they have been since before the pandemic on a price-to-free-cash-flow basis, which could make this dip a great buying opportunity.

Here’s what you need to know.

Peloton’s momentum continued in the fiscal 2021 third quarter (ending March 31), with revenue surging 141% year over year and connected fitness subscribers more than doubling to reach 2.08 million. But the news of the recall has overtaken the narrative in the short term, with the stock price down 27% over the last month.

While the Tread+ goes through a safety overhaul, Peloton has also stopped sales of the basic Tread model to correct a quality issue with the tablet console attached to the Tread. All in all, Peloton expects the recall of both products to cut $165 million in revenue in the fiscal fourth quarter.

For fiscal Q4, management is calling for total revenue to be $915 million. The guidance implies year-over-year growth of 51%, which is a steep deceleration from the triple-digit percentage levels investors have gotten used to lately.

On the flip side, Peloton’s Bike business is looking strong. Management expects global Bike and Bike+ unit sales to be over three times higher in fiscal Q4 than the same quarter in fiscal 2019, and that guidance assumes a modest hit to Bike sales related to the Tread+ recall. Peloton has experienced strong momentum in Bike sales after introducing a price reduction for the original model last year.

Peloton is also seeing momentum with the international business, which is growing faster than the U.S. business. Peloton just announced expansion plans in Australia, and there remains significant growth potential across several international markets.

Demand for Peloton Bikes was surging before the pandemic, with connected fitness subscribers more than doubling in fiscal 2019. And that was with established competition from other fitness equipment makes like Nautilus and ICON Health & Fitness’s NordicTrack products. The stock now trades at a price-to-free cash flow multiple of 50, which looks like a good deal relative to the company’s long-term growth opportunities in the at-home fitness market.

Etsy is still in a solid position for long-term growth

Etsy’s stock price is down 22% over the last month even though the recent earnings results were once again stellar. Revenue jumped 141% year over year, which topped management’s previous Q1 guidance.

The sell-off is due to difficult growth comparisons starting in the second quarter. Management is guiding for Q2 growth to be between 15% to 25% year over year, which looks weak compared to triple-digit percentage levels reported during the pandemic. But that doesn’t really tell investors anything about the long-term growth trajectory, where Etsy is facing a massive opportunity in e-commerce.

There was one highlight from the Q1 earnings report that shows why Etsy is still a business on the rise. Etsy reported it now has 8 million habitual buyers, an increase of 205% over the year-ago quarter. A habitual buyer is one who has made six or more purchases and $200 or more in spending over the last 12 months. Etsy’s most loyal customers are growing faster than its total active buyers.

Why is this important? Growth in buyer frequency drove a 20% increase in gross merchandise sales per buyer. This provides more revenue for Etsy to reinvest in marketing to raise awareness of what’s available on the marketplace and grow the business.

The progress Etsy has made in improving buyer frequency will eventually lead to a stickier place to shop for buyers, as management invests in personalization and other features. This will significantly strengthen Etsy’s competitive advantage.

The shares may remain volatile in the near term, but the stock is already at an attractive valuation level right now. At a price-to-free cash flow multiple of 29.7, the sell-off looks like a good buying opportunity.

This article represents the opinion of the writer, who may disagree with the “official” recommendation position of a Motley Fool premium advisory service. We’re motley! Questioning an investing thesis — even one of our own — helps us all think critically about investing and make decisions that help us become smarter, happier, and richer.

As signs that the second wave of COVID-19 is beginning to wane and travel restrictions loosen, foreign investors are looking to return to the U.S., … END_OF_DOCUMENT_TOKEN_TO_BE_REPLACED

Wall Street stocks continued to rise while government bonds softened as investors addressed the effects of US employment reports, which were much … END_OF_DOCUMENT_TOKEN_TO_BE_REPLACED