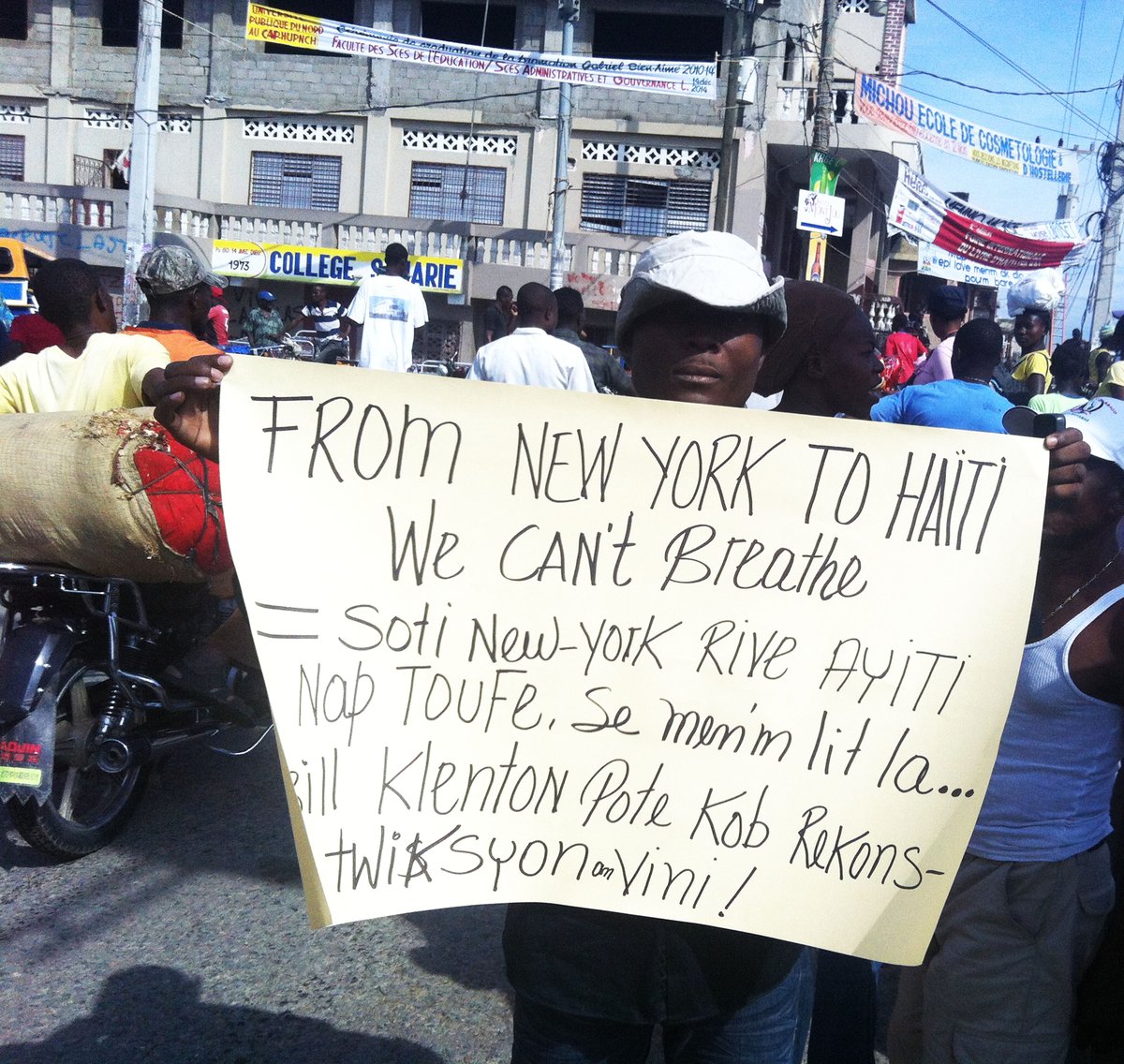 The current crisis taking place in Haiti stems from conditions that, for the past century, the United States has had a direct hand in either creating, manipulating, or defending. While the recent assassination of President Jovenel Moïse has induced U.S. media to place an intermittent spotlight on the country, they have done a poor job of providing any historical context that would expose the central role played by the United States in creating the Haiti that exists today.

Moïse, a rightwing businessman, was installed as president in 2017, after a fraudulent election marked by widespread voter suppression. Although the United States, the European Union, and the Organization of American States endorsed Haiti’s Electoral Council pronouncement that Moïse won a majority vote, the popular view held in Haiti is that this was yet another “electoral coup” orchestrated by the Haitian elite, with the aid of Western governments.  The mass demonstrations that followed the power grab were a continuation of the grassroots effort to put an end to the debilitating poverty, corruption, and violent repression engendered by previous administrations.

Fanmi Lavalas, the popular grassroots movement of the Haitian masses, has been one of the main targets of repression. Since 2004, the movement’s efforts to hold free, democratic elections have consistently been thwarted, as men subservient to the Haitian elite and U.S. business interests have been installed in the highest offices. On November 13, 2018, a government-backed paramilitary force stormed the downtown Port-au-Prince neighborhood of Lasalin, a Lavalas stronghold, and attacked residents—ranging in age from ten months to seventy-two years old. They massacred at least seventy-one children, women, and men, according to human rights activists on the ground. The U.S. Embassy in Haiti vaguely referred to the attackers as “gangs,” but a human rights report conducted in partnership with the National Lawyers Guild determined that this was an act of terrorism directed by the Moïse-PHTK (Haitian Tèt Kale Party) government. The Lasalin massacre barely registered in the U.S. press.

The assassination of Moïse punctuates a crisis that has been unfolding in Haiti for decades. In 1991, following elections that grew out of a widespread popular movement to end the Duvalier dictatorship, Jean-Bertrand Aristide became Haiti’s first democratically elected president. He wasn’t in office a year before the new popular government was overthrown by a US-trained military loyal to the former regime in a September 1991 coup d’état.

Years of violent repression ensued, with thousands of Haitians being killed, imprisoned, or exiled. The Haitian people had to endure racially motivated internment in U.S.-run refugee centers in Guantanamo Bay, Cuba, on top of punitive economic blocks by the Bush and Clinton Administrations, before Aristide was able to return and eventually be re-elected in 2001. His second term was incredibly productive, with Lavalas making enormous advances in public education, health care, labor rights, and infrastructure.

This progress was brought to an abrupt standstill in 2004, when the United States, together with France and Canada, sponsored another coup d’état, which included sending in more than 7,000 U.N. troops. The kidnapping and forced exile of their president, many Haitians believe, was an attempt to curb Lavalas’s progressive reforms to lift the masses from poverty. Raising the minimum wage to seventy gourdes (about $1) a day was a boon to the families of 20,000 factory workers, but a liability to the business interests who benefit from cheap, unorganized labor.

In addition, President Aristide had been calling for reparations from France which, after its defeat in the Haitian Revolution, punished its erstwhile colony by exacting recompense for its lost “property” (i.e., enslaved people).

The facts of these U.S.-led interventions in Haiti—including details concerning the training, funding, and arming of Haiti’s military dictatorships—are laid out in several books including Randall Robinson’s An Unbroken Agony and Jeb Sprague’s Paramilitarism and the Assault on Democracy in Haiti. These books and others, like The Uses of Haiti, by Paul Farmer, also explain the motivations behind U.S. aggression toward Haiti. When we consider Haiti’s economic significance to U.S. business interests, U.S. interference in “the poorest country in the Western hemisphere” (or, more correctly, one of the most robbed) becomes clear, and the origins of the present crisis are demystified.

In the United States today, Haiti is entitled to much more than our pity and charity; it deserves our solidarity. To begin, the birth of this majority Black country had a unique historical impact in advancing racial justice on the world stage. A former colony of France, Haiti led the first successful mass slave rebellion of the colonial era.  In 1791, enslaved Africans launched an uprising that would culminate in Napoleon Bonaparte’s defeat in 1803. This momentous event was a critical blow to slavery everywhere, including in the United States, where news of the revolt inevitably spread, inspiring resistance to slavery in this country.

Having established the new republic in 1804, Haitians outlawed slavery in their constitution, arguably establishing the first true democracy in colonial America. A decade later, Haitian President Alexandre Pétion provided Simón Bolívar with protection, weapons, and soldiers for his campaigns in South America. His one condition was that Bolívar promise to abolish slavery in the territories he liberated from Spain.

Thomas Jefferson, meanwhile, having capitalized on France’s defeat by acquiring the Louisiana Territory in 1803, partnered with European allies to deny Haiti diplomatic recognition.  Defenders of slavery clearly understood the threat posed by the new Black republic. They began to produce racist propaganda maintaining that instability in Haiti was due to the inferiority of Black people rather than a consequence of slavery itself. Slaveowners and their supporters offered up this demonized image of Haiti as evidence that Black people were unfit for freedom and self-determination.

For proponents of racial justice in the United States, it is essential that we take a critical view of conventional representations of Haiti. Anyone familiar with the media’s habitual portrayal—subtle or not—of Black people in the United States as a people who tend toward criminal, violent, uneducated, shiftless, and irrational behavior should not be surprised when that same warped lens is applied to Black people in Haiti.

The language may not be as overtly racist as it was two centuries ago. Yet the lack of historical context in typical news coverage—especially when it comes to U.S. influence in Haiti—together with the persistent misrepresentation of facts, amount to the same message: Haiti is doomed to remain “mired in economic underdevelopment and insecurity.” And the unwillingness to excavate below the surface with regards to the current situation means that Washington is not held accountable for its complicity in impoverishing Haiti.

As we approach July 28, the anniversary of the first U.S. invasion of Haiti in 1915, we might consider that the U.S. government has no moral authority to make decisions about what happens in Haiti today.  This first invasion took place after the assassination of a president, under the pretext of protecting Haiti against “insecurity.” U.S. troops occupied the country for nineteen years, leaving behind a legacy of Jim Crowism. Rather than repeating history, the Biden Administration should terminate the U.S.-led coup and occupation and take the further step of making reparations for exploiting Haiti’s resources and labor and for supporting dictatorships.

For many Black people in the United States, Haiti’s history has a special significance.  When we realize that Haiti’s present is as important, it will be clear that its future is linked to our struggle for racial justice here.  Ultimately, the struggle for racial and other forms of social justice in the United States stands only to benefit from our commitment to solidarity with Haiti. If we say that we value Black lives, our integrity demands that we educate ourselves about the history of U.S.-Haiti relations. For how can we, as Black people, expect that our human rights will ever be truly respected by the same government that applies racist tactics against Black people elsewhere?

A movement for racial justice in the United States will be successful only when it recognizes that people of color around the world share a common struggle.

As signs that the second wave of COVID-19 is beginning to wane and travel restrictions loosen, foreign investors are looking to return to the U.S., … END_OF_DOCUMENT_TOKEN_TO_BE_REPLACED

Wall Street stocks continued to rise while government bonds softened as investors addressed the effects of US employment reports, which were much … END_OF_DOCUMENT_TOKEN_TO_BE_REPLACED