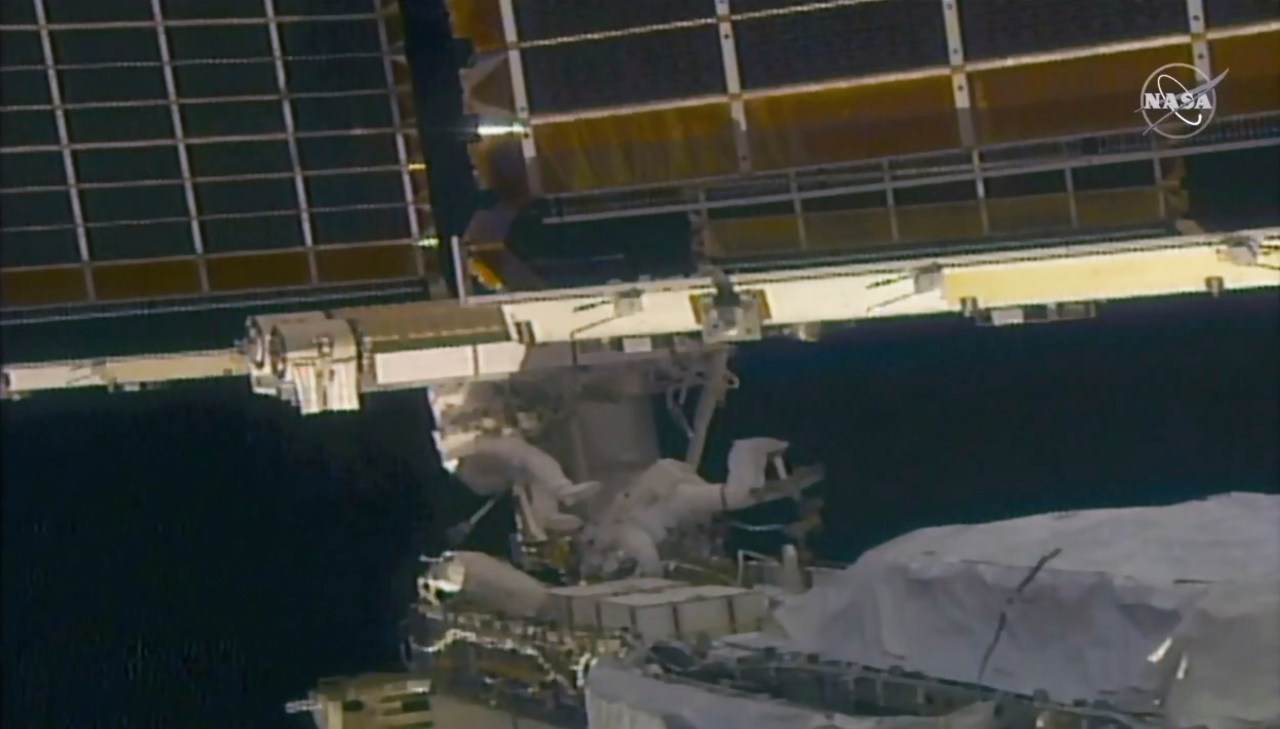 CAPE CANAVERAL, Fla. (AP) — Astronauts ventured out on their second spacewalk in less than a week Sunday to install powerful new solar panels outside the International Space Station.

France’s Thomas Pesquet and NASA’s Shane Kimbrough picked up where they left off Wednesday, when spacesuit and other problems prevented them from unrolling the first in a series of high-tech solar panels.

“Remember: You are butterflies with biceps today,” astronaut Megan McArthur radioed from inside.

After pushing and tugging, the spacewalkers managed to unfold and align the solar panel so both halves were now end to end, resembling a roll of paper towels. Their shout of “Woo-hoo!” was met with applause in Mission Control.

The two had to wait until they were back on the night side of Earth — and the station’s old solar panels were no longer soaking up sunlight and generating power — before making the final power connections. Otherwise, they could be shocked.

While awaiting darkness, the camera-and-light assembly on Kimbrough’s helmet came loose, even though he’d switched to a different suit to avoid the trouble he encountered last time. Pesquet did his best to secure it with wire ties, as the minutes ticked by.

The final step — still ahead — was the unfurling of the panel to its full 63 feet (19 meters) in length.

These new solar wings are designed to roll out like a red carpet, unlike the station’s old ones that unfolded like an accordion. They will give the aging station a much needed electrical boost, as demand for experiments and space tourists grows.

NASA originally allotted two spacewalks for the job — one for each solar panel being installed. But managers added a third spacewalk, given all the earlier problems. Pesquet and Kimbrough will go back out Friday to complete work on the second panel delivered by Space X earlier this month.

This first pair will augment the space station’s oldest solar wings, which are degrading after 20 years of continuous operation.

SpaceX will deliver two more pairs over the next year.

Although smaller than the originals, the new solar panels can generate considerably more power. The space station needs this reenergizing if NASA hopes to keep the space station running the rest of this decade, with private guests paying millions of dollars to come aboard.

A Russian film crew is scheduled to launch to the orbiting outpost this fall from Kazakhstan, followed by a string of rich businessmen. SpaceX is providing the rides from Cape Canaveral.

On Wednesday, the display control panel on Kimbrough’s suit conked out and he had to return to the air lock to reset it. Then his cooling system registered a momentary pressure spike. Engineers are still evaluating what went wrong.

The Associated Press Health and Science Department receives support from the Howard Hughes Medical Institute’s Department of Science Education. The AP is solely responsible for all content.

As signs that the second wave of COVID-19 is beginning to wane and travel restrictions loosen, foreign investors are looking to return to the U.S., … END_OF_DOCUMENT_TOKEN_TO_BE_REPLACED

Wall Street stocks continued to rise while government bonds softened as investors addressed the effects of US employment reports, which were much … END_OF_DOCUMENT_TOKEN_TO_BE_REPLACED