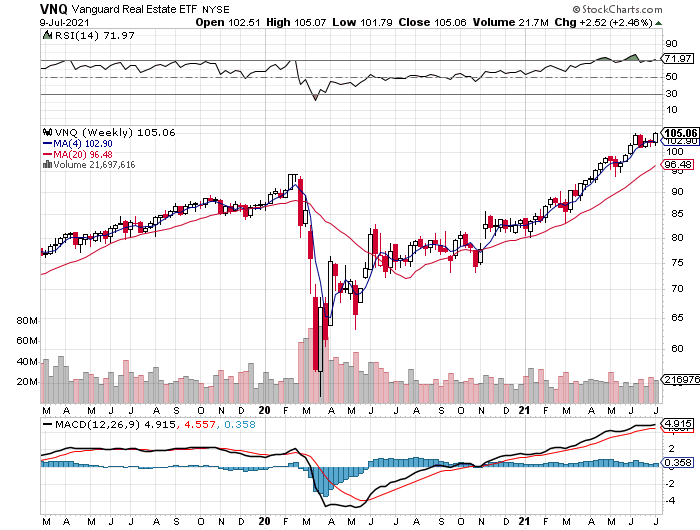 This year’s rally in US real estate investment trusts (REITs) was looking tired recently, but it turned out to be a pause that refreshes.

The gain marked the strongest increase, by far, for our 16-fund global opportunity set last week, as shown in the table above. For details on all the strategy rules and risk metrics, see this summary.

The catalyst? Perhaps it was the ongoing slide in Treasury yields, which casts a favorable light on REITs relatively high payout rates. (VNQ’s trailing 12-month yield: 2.34% vs. 1.37% for a 10-year Treasury Note.) 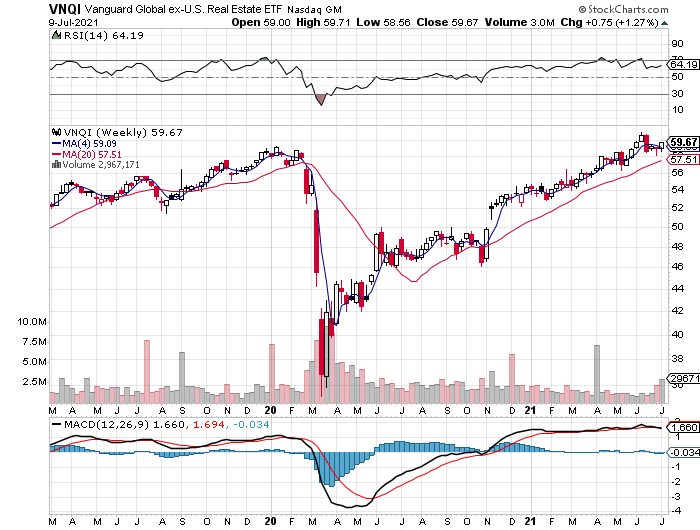 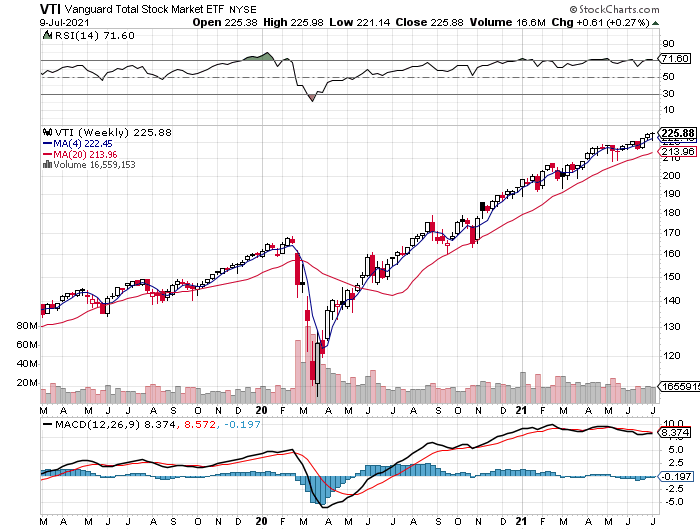 The small-cap slice of the US equities market, however, continues to trade in a range. The iShares Core S&P Small-Cap ETF (NYSE:) slipped 0.8% for the week. 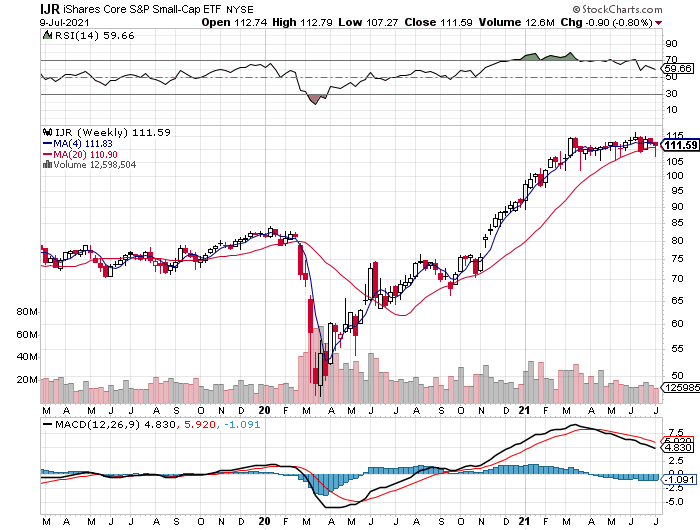 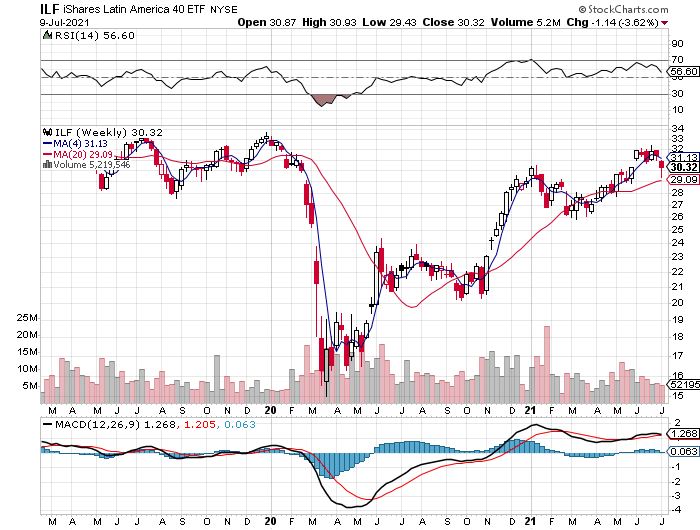 A headwind for the fund was China’s on portions of its formerly high-flying tech industry. China represents about 40% of AAXJ’s portfolio and so the ETF is vulnerable to ongoing repercussions triggered by Beijing’s regulatory changes. 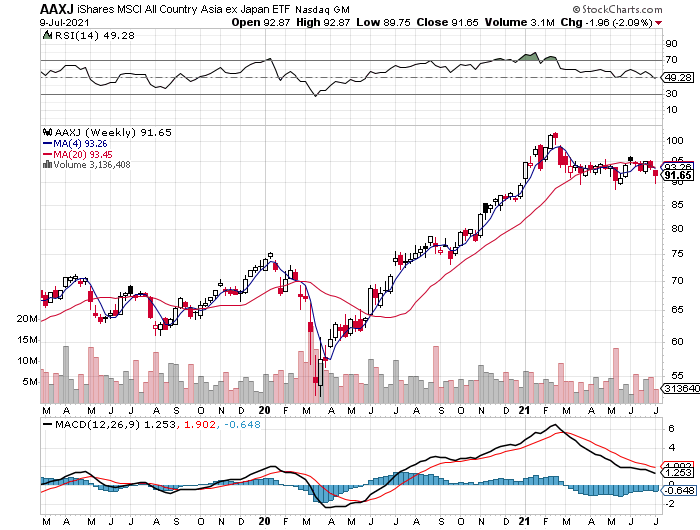 In the US Treasury market, yields continued to slide, although Friday witnessed a sizable rebound after consecutive declines in the previous four trading sessions, based on the benchmark 10-year Treasury rate.

Concerns that the US economic rebound is weaker than previously forecast has triggered a renewed run of bond buying lately. By some accounts, the downward slide in yields since April has run its course.

In any case, the rate gapped down last week, even after Friday’s rebound, settling at 1.37%. 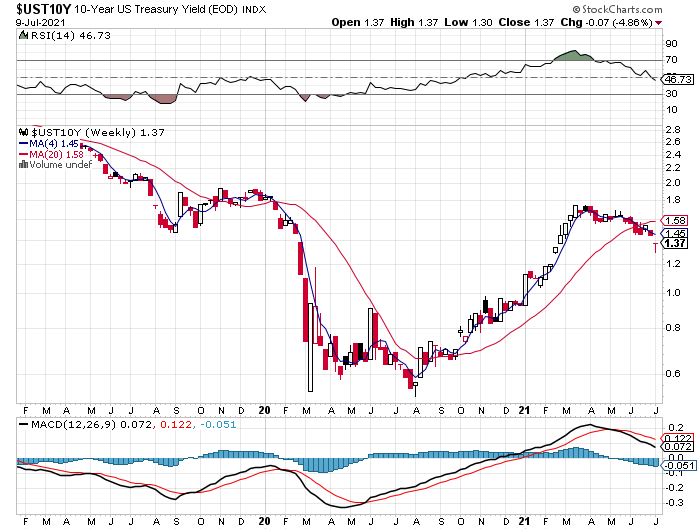 The decline in yields was enough to keep iShares 7-10 Year Treasury Bond (NYSE:) trending higher. Although the ETF suffered a haircut Friday, for the week the fund posted another weekly advance, rising 0.6%. 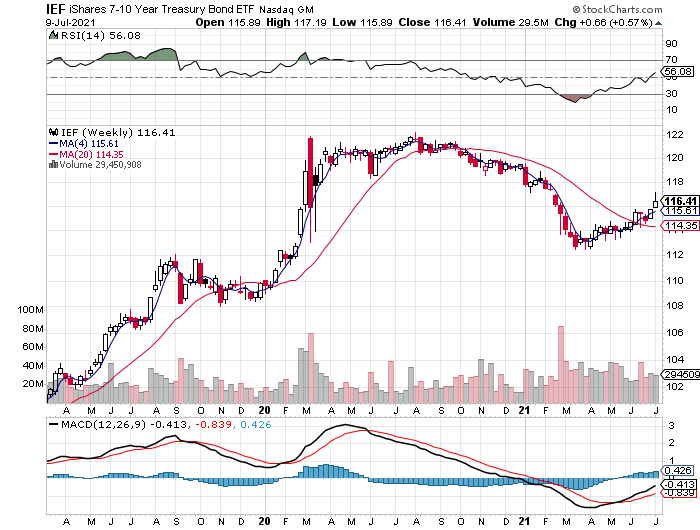 Despite a mixed week for global markets, three out of four of our portfolio benchmarks posted modest gains while a fourth held steady.

The US 60/40 stock/bond portfolio continued to lead, posting a 0.3% increase for the trading week. Global Beta 16 (G.B16), which holds all the ETFs in the first table above in weights shown below, was unchanged.

Year-to-date, performance is tightening up in relative terms for the strategy benchmarks. A relatively thin 80 basis points now separates the leader from the two laggards.

Meantime, the directional bias remains bullish for all the benchmarks, based on our proprietary measure of momentum, as shown in the MOM column in the table below. The current reading is 100 across the board, the strongest bullish profile for the metric.

As signs that the second wave of COVID-19 is beginning to wane and travel restrictions loosen, foreign investors are looking to return to the U.S., … END_OF_DOCUMENT_TOKEN_TO_BE_REPLACED

Wall Street stocks continued to rise while government bonds softened as investors addressed the effects of US employment reports, which were much … END_OF_DOCUMENT_TOKEN_TO_BE_REPLACED