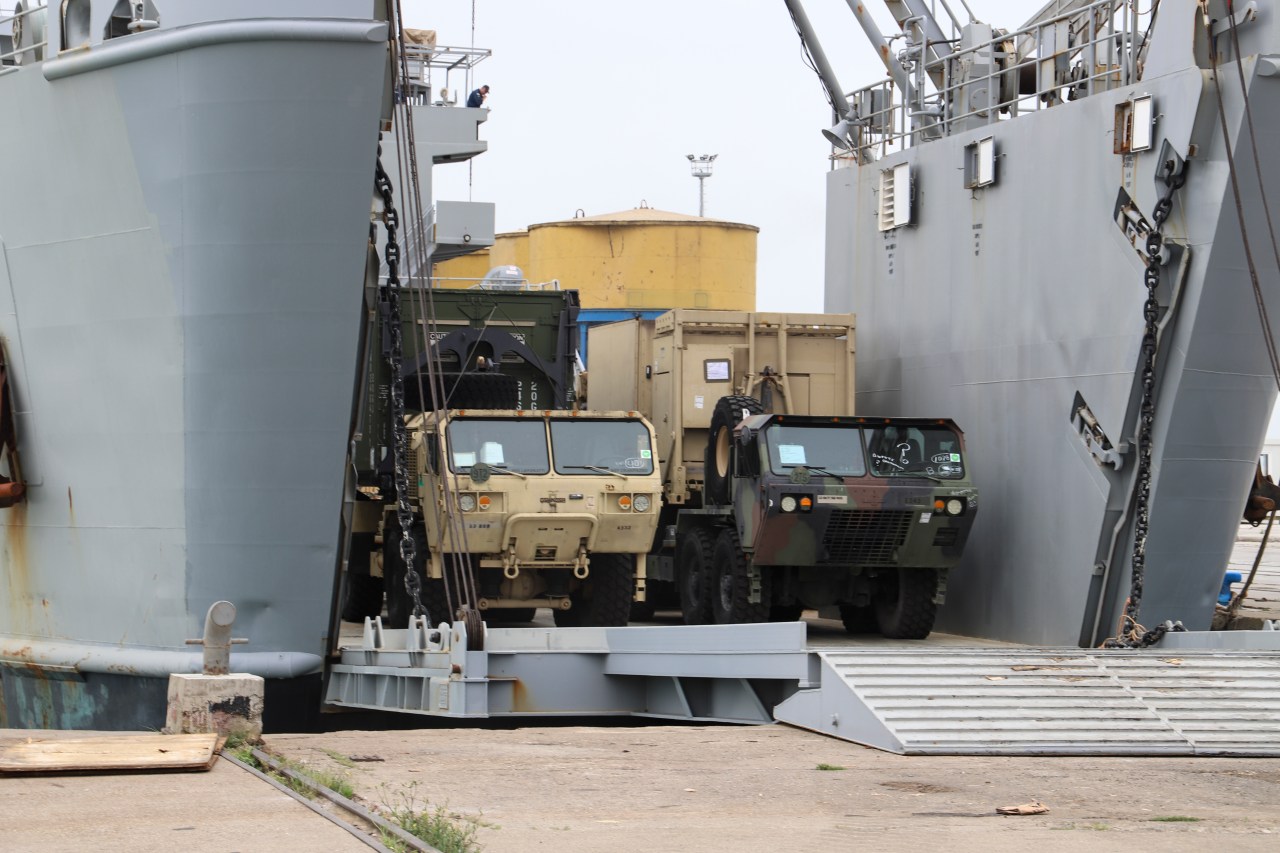 U.S. army vehicles disembark from a vessel at Albania’s main port of Durres, Saturday, May 1, 2021. Florida National Guard’s 53rd Infantry Brigade Combat Team were being discharged from the USNS Bob Hope ahead of a two-week training of up to 6,000 U.S. troops in six Albanian military bases, as part of the Defender-Europe 21 large-scale U.S. Army-led exercise. (AP Photo/Hektor Pustina)

DURRES, Albania (AP) — Albania’s main port of Durres has welcomed a huge influx of containers and big trucks this week ahead of NATO exercises, a concentration of military vehicles that U.S. officials said has not been seen in the Adriatic nation since World War II.

Some 700 pieces of equipment from the Florida National Guard’s 53rd Infantry Brigade Combat Team were being discharged from the USNS Bob Hope at Durres, 33 kilometers (20 miles) west of the capital, Tirana. They will be used for two weeks of training involving up to 6,000 U.S. troops at six Albanian military bases.

It’s part of the US Army-led Defender-Europe 21 multinational military exercises, which are focused on deterring aggression and building operational readiness with NATO and a greater number of allies and partners. They run from May 17 to June 2.

“Albania is a valued partner. Our militaries benefit by training together, enhancing interoperability, building operation readiness and strengthening relationships — all of which enable our ability to respond to any crisis, anytime, together with our allies and partners,” Tammy Muckenfuss of the U.S. Army for Europe and Africa, based in Germany, said Saturday.

To Maj. Randall Moran, “bringing all these groups together is something very unique.”

Divers were still checking the port’s 7-meter ( 23-foot) deep draft. But the two logistic support vessels transporting the vehicles can operate in shallow water and were working nonstop to bring in the military equipment.

A British military vessel will also arrive in the next few days.

Defender-Europe this year has involved around 28,000 U.S., allied and partner forces from 27 nations to conduct simultaneous operations across more than 30 training areas in more than a dozen nations, from the Baltics and Africa to the Black Sea and the Balkans.

Besides offering six naval, land and air bases, Albania, a NATO member since 2009, will commit 1,000 troops to what Defense Minister Niko Peleshi called “a historic event because it is the biggest exercise in Albania and the region.”

Muckenfuss said “Albania has been an amazing host and have greeted all of our soldiers with warmth.”

“It’s a great choice for the exercise,” Moran said. “I think you guys are coming up more or less like a hidden gem. So that the people are great, the food’s wonderful and the views are magnificent.”

As signs that the second wave of COVID-19 is beginning to wane and travel restrictions loosen, foreign investors are looking to return to the U.S., … END_OF_DOCUMENT_TOKEN_TO_BE_REPLACED

Wall Street stocks continued to rise while government bonds softened as investors addressed the effects of US employment reports, which were much … END_OF_DOCUMENT_TOKEN_TO_BE_REPLACED