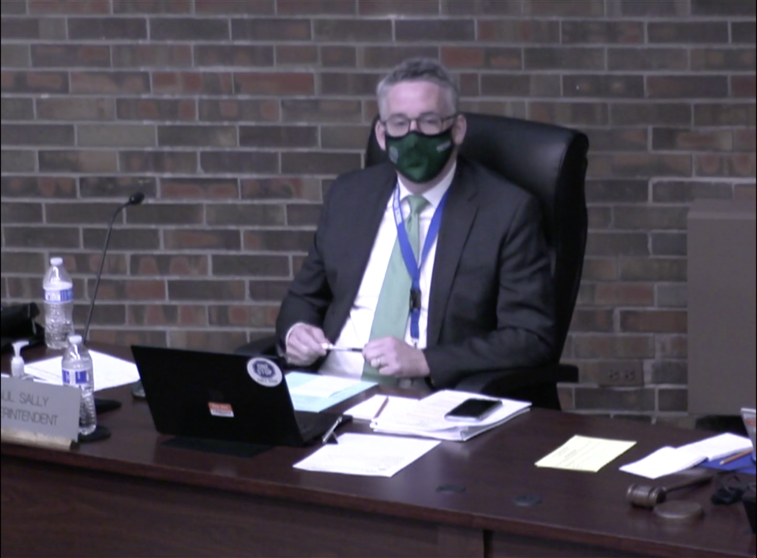 In the late 1990s, Jay Mathews, who was then a writer at the Washington Post, set out on a quest to rank the best high schools throughout the United States.

While the rankings’ methodology and publication have changed since, the formula used to determine a school’s positioning is largely the same.

Now published by U.S. News and World Report, the rankings slotted this year New Trier High School as the 14th best high school in Illinois and the 322nd in the nation.

District officials disagree and believe the rankings, and the ways in which they’re determined, are “fundamentally capricious and reductive,” as they discussed during the monthly board meeting on Monday, May 17.

During the meeting, Peter Tragos, New Trier’s associate superintendent for curriculum and instruction, walked the board of education through a presentation “deconstructing” the rankings and called their methodology “misguided” and “flawed.”

“Though the metrics have evolved, and since moved to U.S. News and World Report, they are still an inaccurate measure of the quality of a high school,” Tragos says in a memo to the board.

Tragos said the core of the rankings formula continues to rely upon, as it did when it was first published, the importance of Advanced Placement exams.

According to US News & World Report, the category for College Readiness measures the percentage of seniors who take the exams. And better scores on the exams weigh more on the measurement.

College Readiness makes up the largest portion of the rankings formula, and New Trier ranks 21st in the state by that metric.

But Tragos explained that the school’s philosophy around AP courses differs from many Illinois high schools, which he said “funnel” younger students into AP courses.

“Across all content areas, we offer alternatives to AP courses to develop the college readiness skills we know are important,” he wrote in the memo. “Our teachers have designed rich and rigorous curricula, focusing on developing critical thinking, writing, problem-solving and analytical skills, communication and collaboration skills that prepare students exceedingly well for college and post high school life.”

Based on the list’s ranking criteria, New Trier ranks first in the state among open-enrollment schools in the mathematics and reading proficiency category. This metric is largely based on SAT performance from 2019, which is the last time Illinois conducted statewide assessments.

According to Tragos, New Trier “historically has been the state’s top open enrollment school for average composite scores on the SAT and the ACT when that was the state-required test.”

Schools officials were also critical of how College Readiness excludes students who do not take AP courses. At New Trier, Tragos said, these students perform above state and national averages.

Students in New Trier’s Class of 2019 who took 3-level English in their senior year but never took an AP English course had an average ACT: English score of 28, school data shows. The ACT’s college readiness benchmark in English is 18. Forty percent of Trevians in this category scored in the top 10 percent in the nation, Tragos said.

Related to math, New Trier students who took 3-level precalculus their senior year but did not take an AP math course reportedly scored an average of 27.2. The ACT’s college readiness benchmark in that section is 22.

Tragos added that he “would argue these students are more than college ready, yet they are not factored into their score.”

“Our non-AP curriculum is incredibly rigorous, it’s very rich, it’s developmentally appropriate for students and if we want to measure them against other students who take standardized tests,” he said. “They are far and above their peers in doing so.”

Superintendent Dr. Paul Sally addresses the board at its May 17 meeting during a discussion on New Trier’s ranking in a recent publication.

“We do not believe that rankings are a fair assessment of any school,” Tragos says in his memo. “Rankings such as U.S. News or Academic Influence must be considered by looking at the details of what they are counting and measuring, not just what name they choose to give a category.”

The No. 14 ranking is “pretty close” to the lowest New Trier has been ranked, officials said, noting the school was tabbed No. 13 in 2020.

Regardless of New Trier’s ranking, school officials believe the list is not an accurate reflection of college readiness.

“Every few years I think it’s important for us to give this light and tell people about this,” Superintendent Dr. Paul Sally said. “It’s just important for them to understand this is not the only way, and in fact it’s a limited way, to measure college readiness.”

The Record is a nonprofit, reader-funded news site. Our public-service journalism is free for all to read.

To support The Record, become a subscriber for full access to our local news.

Just want to help? You can donate to The Record at any time.

As signs that the second wave of COVID-19 is beginning to wane and travel restrictions loosen, foreign investors are looking to return to the U.S., … END_OF_DOCUMENT_TOKEN_TO_BE_REPLACED

Wall Street stocks continued to rise while government bonds softened as investors addressed the effects of US employment reports, which were much … END_OF_DOCUMENT_TOKEN_TO_BE_REPLACED