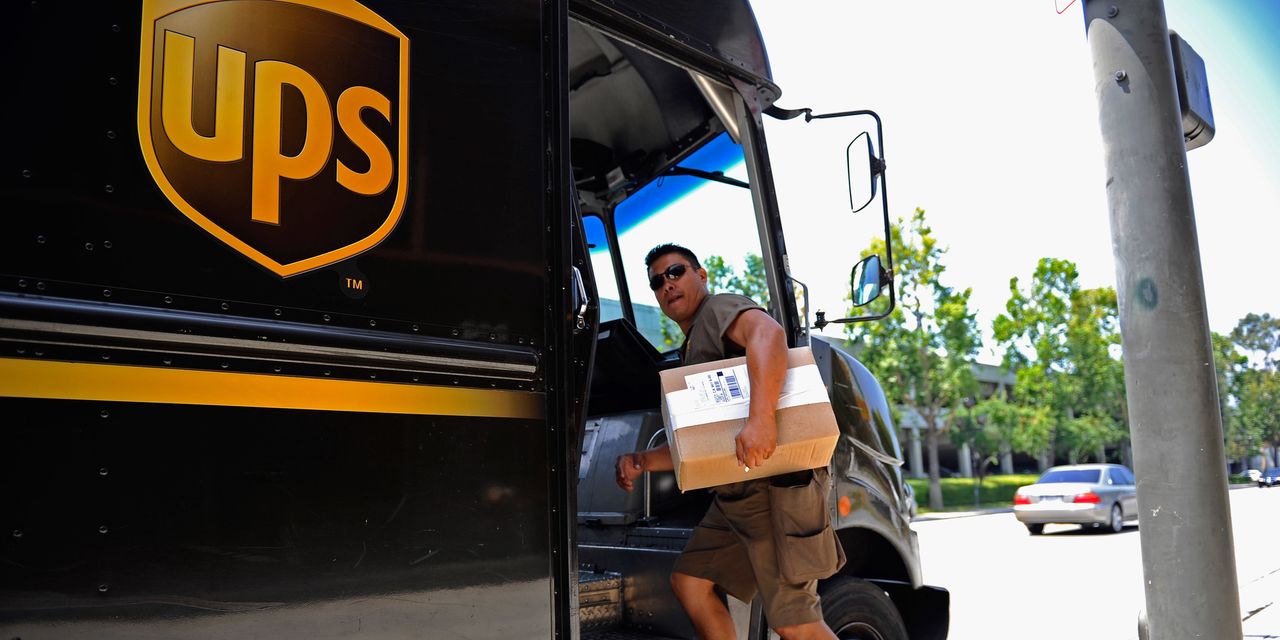 Shares of United Parcel Service Inc. took a dive Tuesday, toward the worst performance in nine months, after the package delivery giant reported overall second-quarter profit and revenue that beat expectations, but did so despite a revenue miss by its largest U.S. business segment.

The stock
UPS,
-7.03%
tumbled 7.1% in afternoon trading Tuesday, putting it on track to close at a three-month low, and to suffer the biggest one-day selloff since October 2020. That’s enough to make the stock the biggest decliner among the SPDR Industrial Select Sector exchange-traded fund’s
XLI,
-0.63%
components, and the Dow Jones Transportation Average’s
DJT,
-2.22%
second-biggest decliner.

The selloff comes after the stock had run up 19.4% over the past three months through Monday, which compares with the 7.9% gain in the shares of rival FedEx Corp.
FDX,
-4.74%
over the same time, and a 2.1% decline in the Dow transports.

Looking ahead, CFO Newman said market conditions are expected to remain “favorable,” but said he would keep a close eye on potential risks, such as how the COVID-19 pandemic evolves, inflationary pressures and consumer spending preferences.

Overall second-half 2021 revenue growth is expected to be around 5.4% over the same period a year ago, Newman said. Based on the $46.13 billion in revenue reported in the second half of 2020, and $46.33 billion in revenue reported so far this year, that implies full-year 2021 revenue of about $94.95 billion, which is above the current FactSet consensus of $94.28 billion.

For the U.S. Domestic business, Newman said second-half 2021 revenue growth was expected to be about 8.2%. That implies full-year revenue of $59.76 billion for that business, which is below the current FactSet consensus of $60.22 billion.

As signs that the second wave of COVID-19 is beginning to wane and travel restrictions loosen, foreign investors are looking to return to the U.S., … END_OF_DOCUMENT_TOKEN_TO_BE_REPLACED

Wall Street stocks continued to rise while government bonds softened as investors addressed the effects of US employment reports, which were much … END_OF_DOCUMENT_TOKEN_TO_BE_REPLACED