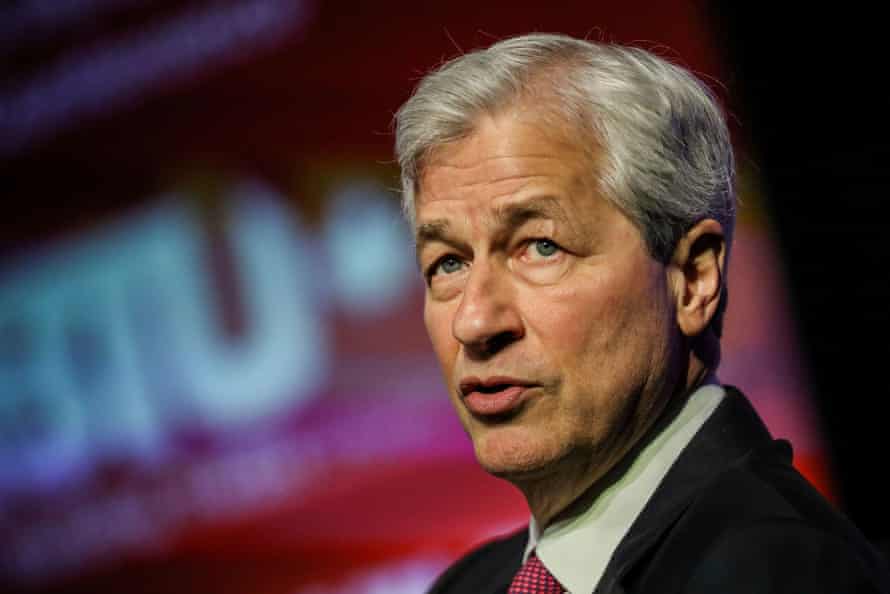 The US has been “torn and crippled by politics, as well as racial and income inequality” but is about to enter a post-pandemic boom, according to JP Morgan boss Jamie Dimon.

In his annual letter to shareholders, Dimon, the US’s pre-eminent banker, said the economy was on the edge of a “Goldilocks moment” where expanding vaccinations, high savings rates and the Biden administration’s massive stimulus bill could trigger a strong recovery lasting well into 2023.

Dimon’s closely watched letter stands in marked contrast to last year’s, when the JP Morgan chief executive predicted the US was heading for a “bad recession” in which US gross domestic product could fall by up to 35%.

But his upbeat assessment of the economic landscape also comes with caveats. Dimon has long warned that growing economic inequality poses a systemic threat and that future growth has been challenged by “China, Covid-19 and our own competence”.

Dimon also used the letter to call for greater corporate involvement in the political sphere, a move that comes as US business has been pressed to speak up on issues including racial inequality and voting rights.

2020 was an “extraordinary year by any measure”, wrote Dimon.

“It was a year of a global pandemic, a global recession, unprecedented government actions, turbulent elections, and deeply felt social and racial injustice. It was a year in which each of us faced difficult personal challenges, and a staggering number of us lost loved ones. It was also a year when those among us with less were disproportionately hurt by joblessness and poverty.

“And it was a time when companies discovered what they really were and, sometimes, what they might become.”

America has faced tough times before, Dimon noted citing the civil war, first world war, the US stock market crash of 1929 and the Great Depression that followed, among others. “But in each case, America’s might and resiliency strengthened our position in the world, particularly in relation to our major international competitors. This time may be different.”

China’s leaders believe that America is in decline, wrote Dimon and “see an America that is losing ground in technology, infrastructure and education – a nation torn and crippled by politics, as well as racial and income inequality – and a country unable to coordinate government policies (fiscal, monetary, industrial, regulatory) in any coherent way to accomplish national goals. Unfortunately, recently, there is a lot of truth to this.”

The US needs a “Marshall plan” he wrote, referring to the initiative to help rebuild western Europe rebuild after the second world war. Such a plan would mean more spending on infrastructure, education, affordable child care, and job training and “may very well mean higher taxes for the wealthy”.

“Should that happen, the wealthy should keep in mind that if tax monies improve our society and our economy, those same individuals will be, in effect, among the main beneficiaries,” wrote Dimon.

In an interview with the Wall Street Journal, Dimon also suggested he was supportive of a corporate tax rise, as long as it was “reasonable and moderate” and kept the US competitive with other countries.

His comments come as the Biden administration is attempting to push through a $2tn infrastructure bill and pay for it, in part, by increasing corporate tax rates. The bill faces unanimous opposition from Republicans, some Democrats and the Business Roundtable, the US’s most powerful business lobby.

But other business leaders have been more supportive. This week, Amazon founder Jeff Bezos voiced support for the infrastructure bill, and said he was open to a rise in tax rates for business.

Dimon also said JP Morgan was willing to take political positions on the big issues of the day. His comments come as Republicans have turned on businesses that have weighed in on a controversial voting rights bill in Georgia that opponents say will disenfranchise Black voters. Mitch McConnell, the minority leader in the Senate, told chief executives this week to “stay out of politics”.

Dimon wrote: “We are fully engaged in trying to solve some of the world’s biggest issues – climate change, poverty, economic development and racial inequality,”

“We engage at this level because companies (like ours) have an extraordinary capability to help. We help not just with funding but with developing strong public policy, which can have a greater impact on society than the collective effect of companies that are responsible community citizens locally.”

As signs that the second wave of COVID-19 is beginning to wane and travel restrictions loosen, foreign investors are looking to return to the U.S., … END_OF_DOCUMENT_TOKEN_TO_BE_REPLACED

Wall Street stocks continued to rise while government bonds softened as investors addressed the effects of US employment reports, which were much … END_OF_DOCUMENT_TOKEN_TO_BE_REPLACED